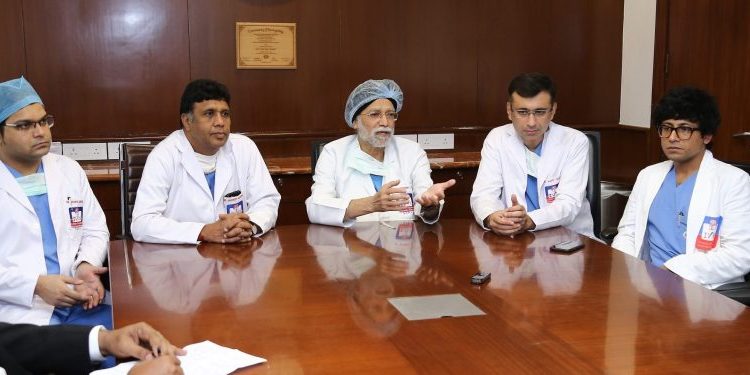 The Institute of Vascular and Endovascular Sciences at Sir Ganga Ram Hospital (SGRH) has recently completed 1,000 vascular surgeries. The hospital set up a Hybrid Operating Room (HOR) equipped with Artis Q angiography system with a surgical table from Siemens Healthineers for vascular applications in November 2018. Conducting an average of 200 procedures, including peripheral interventions every month.

A large number of patients with arterial disease have multi-level diseases which require a combination of open surgery and endovascular intervention therapies. It is possible to perform complex procedures using Artis Q Hybrid OR with fusion imaging capability to ensure optimal endovascular repair. Hybrid OR combines both open surgery and endovascular intervention therapies in a single stage rather than subjecting patients to repeated procedures.

“The advantage of hybrid lab is that it comprises both, the surgical part as well as the endovascular intervention part. In addition, while the success rate is high, the risks associated with it are less, informed Dr Varinder S Bedi, Chairman, Institute of Vascular and Endovascular Sciences, SGRH, New Delhi.

He added, “Fifteen per cent population in India has foot at risk in diabetes, which causes amputation due to loss of sensation. Out of this, six per cent people have to lose their limbs for a lifetime, but this is preventable with the help of surgery.”

Burden of vascular diseases is increasing at an alarming pace in India across genders, age groups and geographical spread. Increasing prevalence is largely on account of the changing lifestyle and the socio-economic conditions. India today is the diabetic capital of the world, with almost 60 million diabetics. Varicose veins and deep vein thrombosis with serious potential complications involving veins are also on the rise. Accidents with injury involving major blood vessels are rapidly increasing with socio-economic changes in the community.

“50 per cent of role in amputation in diabetics is initiated by foot ulcers because of the absence of sensation. 60-70 per cent people having type-2 diabetes, aged between 40-50 years come to get treated here. In western countries, this age group is between 70 and 80 years,” informed Dr Ajay Yadav, Director — Vascular CathLab and In-Charge — Diabetic Foot Care Centre, SGRH, New Delhi.

Talking about the contribution made by Siemens towards these surgeries, Sanjay David, Head — Advanced Therapies, Siemens Healthineers, India, said, “The team at SGRH with Artis Q Hybrid OR has set a benchmark in vascular surgery offering unmatched clinical expertise and cutting-edge technologies. Through our unique solutions, we are committed to play a significant role in transforming care delivery in India”.

He also informed that Siemens has developed this equipment to assist the team of doctors who perform vascular surgeries at SGRH. “9.5 per cent osf our revenue is pumped back into R&D,” he added.

Talking to Express Healthcare, David mentioned that, “We also have trainers who come to train these doctors on how to operate the equipment, in order to make the process easier for them.”