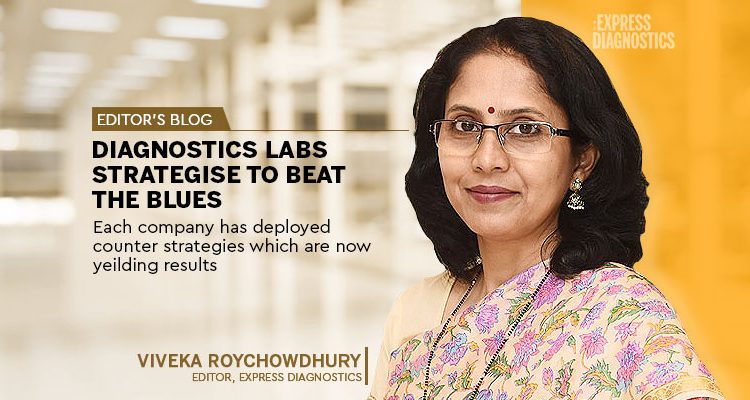 Each company has deployed counter strategies which are now yeilding results

Unlike the hospital and pharma segments, diagnostics labs had fairly good Q1 res ults. These positive sentiments come inspite of increased competition leading to price wars as well as regulatory concerns like the essential list of diagnostics and price caps from the government. However each company has deployed counter strategies and it looks like these are now yeilding results.

A Prabhudas Lilladher note analyses that for Dr Lal Path Labs, rationalisation of clinical labs and re-routing many tests from regional labs to the central labs in Delhi and Kolkata has lead to improved margins. Secondly, patient volumes increased due to aggressive contribution from expanded bundle-offer packages.

The flip side is that Dr Lal Path Labs’  overall realisations declined marginally as moderate growth in high-end tests (test per patient in Q1FY20 improved to 2.4 vs 2.3 from Q1FY19 ) was offset by lower realisations of bundle-test business. Thus revenues/patient declined marginally to Rs684 in Q1FY20 vs. Rs691 in Q1FY19 due to price rationalisation. Looking ahead, the company’s market expansion plans are set to make up the loss. The focus will be to penetrate further in West Bengal and volume growth in FY20E and FY21E could possibly come from the stabilisation of the central lab in Kolkata.

Thyrocare Technologies’ strategy is increased focus on its B2B business as well as exploring new opportunity in pregnancy tests. Like Dr Lal Path Labs, the focus is on volumes growth. While Thyrocare will keep up the spend on advertisements (at 4-5 per cent of sales) for growth in the B2C segment, it will increase focus on B2B with higher incentives and revenues per franchisee as it eliminates layers of middlemen and channels benefits of rationalised price to end consumers, according to a note from Prabhudas
Lilladher.

Thyrocare’s second strategy was to launch pre-natal and neonatal tests in May FY20 as the segment is expected to gain volume and premium pricing. With disruptive pricing, the management plans to target molecular biology testing (child deformity) in neonatal segment as 50 per cent of these tests are imported from China. There has reportedly been good uptake in this segment in the first three months since commercialisation of the neo-natal tests.

Metropolis  Healthcare also showed good growth. Their strategy to expand retail contribution in focus cities showed results, with Q1FY20 revenue from retail contribution at 56 per cent (51 per cent in Q1FY19). Total patient visits and total tests performed registered an excellent growth of 17.7 per cent and 20.9 per cent YoY. The second strategy was the launch of a new wellness initiative in February 2019 across 36 cities, which clocked a 40 per cent growth in the first quarter.

Further growth could come if all diagnostics companies look at participating in the  Ayushman Bharat (AB) Yojana. The  first anniversary milestone of AB is due on  September 23  and will hopefully see both celebrations as well as introspection by both the government and private sector.

Dubbed Modicare and central to Prime Minister Modi’s re-election, the scheme is a first step towards universal healthcare coverage but it has its fair share of detractors.

The National Health Authority (NHA) is well aware that there are many loop holes. It’s website has two working papers with preliminary analyses of some aspects. While the first paper deals with the patterns of utilisation for hysterectomy, the second focusses on neo-natal care packages. Though a longer and deeper review will be necessary, there are already some worrying trends which can be corrected. For instance, the researchers flagged data on a few male hysterectomy cases as well as a few among women under 15 years and more than 90 years of age. This could indicate issues in SECC data quality and also the need for improved monitoring of both data and claims usage.

Both papers point to the need for greater involvement of the private sector. Revised package rates are due to be released on the first anniversary and it is hoped that
these will encourage more private sector enterprises to
participate on AB.

The case to aim for a part of the AB pie is logical. A recent white paper by SKP,  titled India’s National Health Protection Scheme: Ayushman Bharat – Growing Opportunities in Affordable Healthcare, outlines why the scheme could unlock huge opportunities for different healthcare stakeholders.

Diagnostic labs bag the third largest share (10 per cent) of the total healthcare out of pocket expenditure (OoPE) in India, after medicines (52 per cent) and private hospitals (22 per cent). Since free diagnostics and medicines for maternal health, child health and NCD’s will be provided for citizens eligible to be covered by AB, this segment is bound to see a volume increase as the scheme increases its coverage over the next few years. The same goes for the other segments as well. Over the next three years, the medical equipment and furniture segment is expected to post a 33-45 per cent CAGR, while the medical consumables and disposables will touch 23-33 per cent CAGR. The expected impact on the pharma industry (post NHPS) is expected to be 15-16 per cent CAGR over the next three years.

Thus the case for diagnostic companies to be part of AB seems very clear. For one, it would expand their market share into the rural areas, while assuring volume growth.

The challenge would be to ensure timely payments and prevent frauds. But one year down the line, the NHA is putting in systems to ensure that the loopholes are plugged. Given this evolution, will diagnostic labs bite the bait?