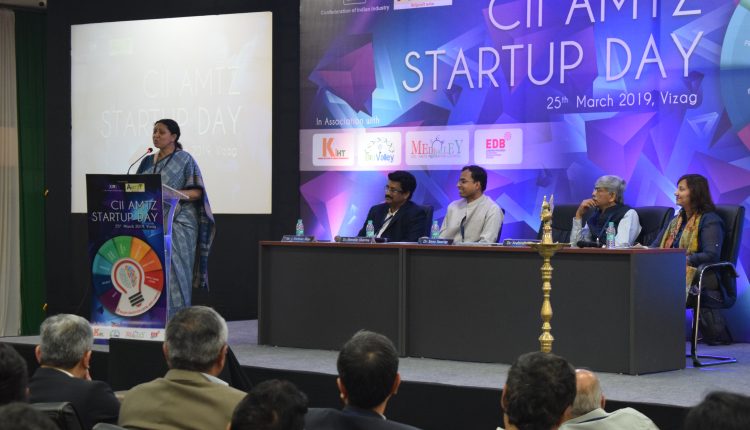 More than 250 participants attended the event

Andhra Pradesh Medtech Zone in association with CII has launched CII AMTZ Startup day at Kalam Convention Center at AMTZ Campus. The entire effort was spearheaded by two incubators housed within the AMTZ campus, Biovalley and Medivalley. More than 250 participants attended the event making it one of the biggest efforts in the startup ecosystem.

Dr Renu Swaroop, Secretary, Department of Biotechnology, Government of India, graced the occasion as the Chief Guest and shared her thoughts. Dr Swaroop lauded the efforts made by the Andhra Pradesh Medtech Zone under the leadership of Dr Jitendar Sharma, MD&CEO, AMTZ in a short time and setting the example for delivering quality with speed. She underscored the importance of bringing together various stakeholders such as manufacturers, startups, financiers, incubates and various other policy making bodies such as WHO and CII. Dr Swaroop opined that this would definitely lead to bringing measurable changes in the startup ecosystem.

In his opening remarks, Dr Sharma set the context for the CII AMTZ STARTUP Day by taking the audience through the journey of making AMTZ, from excavation to inauguration in 342.

Addressing the audience, Dr Arabind Mitra, Scientific Secretary, Office of the Principal Scientific Advisor, Government of India, stressed the need for treading the hard path and not being comfortable in treading a soft one.

Representing CII, Srinivas Raju, Vice Chairman, Visakhapatnam Zone, recollected the origination of idea at the World Economic Forum at Davos. He said, going forward, CII and AMTZ would work together with various industry bodies, influencers, policy making bodies across the spectrum and bring forth outcomes that are measurable and those that would be immensely beneficial to the start-up eco system.

Dr Madhur Gupta representing the WHO India office took the audience through the journey of WHO in driving frugal innovations and various policy interventions in the area of medical technology and access to medical devices.

The event also saw participation from more than 100 start ups, manufacturers, 3D printing agency, Think 3D and TUV Rheinland, Financiers such as HDFC, Yes Bank, SIDBI and SBI, Insurance provider, NTrust and students from universities like the GITAM University. A one to one interaction was arranged between all the above stakeholders in order to make this event more outcome oriented and not just limit it to a conference.