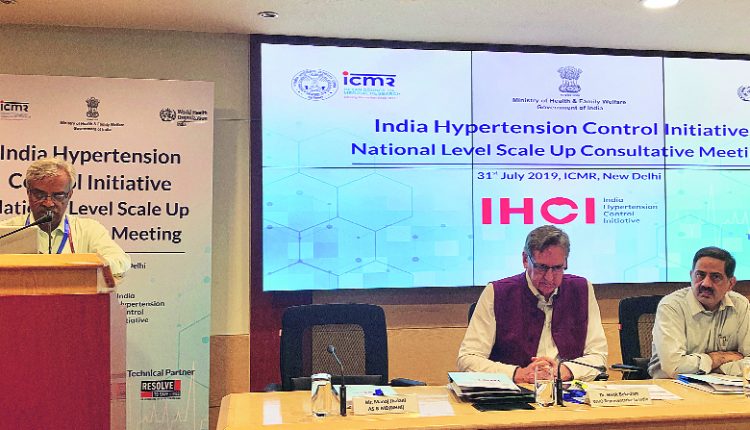 IHCI complements the National Programme for Prevention and Control of Diabetes, Cardiovascular Disease and Stroke (NPCDCS) of Ministry of Health and Family Welfare (MoHF&W), Government of India

The Indian Council of Medical Research (ICMR), in collaboration with the World Health Organisation (WHO) and the Ministry of Health and Family Welfare (MoH&FW), recently announced a nationwide expansion of their programme India Hypertension Control Initiative (IHCI). Launched in November 2017, IHCI has enrolled more than three lakh patients with high blood pressure in the government health facilities in 25 selected districts of Punjab, Madhya Pradesh, Kerala, Telangana and Maharashtra. The programme will now expand to 100 districts across India covering all the states. It will accelerate the implementation of quality hypertension treatment for over 15 crore people over the next four years and prevent deaths from heart attack, stroke and kidney failure.

IHCI complements the National Programme for Prevention and Control of Diabetes, Cardiovascular Disease and Stroke (NPCDCS) of Ministry of Health and Family Welfare, Government of India. In this regard, state nodal officers (NPCDCS) from 26 states and two union territories were present at the IHCI national-level scale up consultative meeting that was held in the premises of the Indian Council of Medical Research (ICMR), Delhi.

On the occasion, Dr Balram Bhargava, Secretary, Department of Health Research and Director General, ICMR, said, “The Government of India has adopted a national action plan for the prevention and control of non-communicable diseases and has set a target for a 25 per cent reduction in high blood pressure by 2025. With approximately 20 crore adult patients having hypertension in India, more support from all quarters will be needed to help the government achieve this target. IHCI is a model initiative towards that. Prevention and treatment of hypertension is far safer for patients than expensive interventions like bypass surgery and dialysis.”

He added, “Everyone above the age of 30 years should get BP measured once a year and adopt a healthy lifestyle very early in life.”

Heart attack and stroke are the leading causes of death globally. Hypertension is the most common reason for sudden heart attack or stroke. In India, one in four adults have high blood pressure. Among people with high blood pressure, only half have been diagnosed and only one in 10 have blood pressure under control. As a result, a large number of people develop heart attacks, strokes and kidney failure during the productive years of their life.

Also addressing the audience, Dr Chinmoyee Das, DADG (NCD), MoHF&W, said, “Uncontrolled hypertension is a major attributable factor for cardiovascular diseases, cerebrovascular diseases and chronic kidney diseases. The diagnosis is simple and its treatment can be initiated at primary-care level with adequate training.”

Dr Henk Bekedam, WHO Representative to India, said, “Hypertension is a silent killer. Its treatment is simple, effective, easily available and needs to be continued lifelong. The World Health Organisation has prioritised Universal Health Coverage and the India Hypertension Control Initiative serves as an excellent example of a free programme that improves the health of the Indian people.”

The state had implemented IHCI in November 2018 in 10 districts, where 51,081 patients registered and the average control rate was 53 per cent, informed Dr Raviteja, State Nodal Officer – NCD. He emphasised, “We need to focus on improving control rate, which can be done by using two-stack system and home visits by Accredited Social Health Activists (ASHAs) and Auxiliary Nursing Midwifery (ANMs).”
However, the state faced some challenges too, he said. “Overburdened health staff in multiple programmes, lack of professional digital blood pressure (BP) apparatus at all levels and involving the private sector in the programme activities and reporting, among others, are a few pain points that need to be addressed in Telangana,” he pointed out.

On April 7, 2018, Kerala implemented the IHCI programme in four districts — Thiruvananthapuram, Thrissur, Kannur and Wayanad, notified Dr Bipin Gopal, State Nodal Officer – NCD, Kerala. “Within the year, a total of 121,429 patients registered for the programme and 38 per cent achieved control. Nearly, one-third did not achieve the control, while one-fourth were lost to follow up,” he added.
The challenges faced by the state included: availability of digital blood pressure (BP) apparatus in few facilities only and scepticism among doctors about readings; therapeutic inertia, wherein doctors do not always follow protocols, especially for patients with borderline elevated blood pressure and coverage among tribal population in Wayanad.

To improve the programme further, Dr Gopal suggested strengthening of population based screening (PBS) and opportunistic screening to increase coverage, expansion into the private sector, integration of NPCDCS and IHMI indicators for simplified documentation and reporting systems, and designated staff for NCD in all facilities for better availability in terms of document evaluation and reporting.

Dr Nikhil Patil, who is the State Programme Manager for NCD, Maharashtra, informed that IHCI was implemented there in November 2018 and more than 61,000 patients registered for it. As a result of the execution of the programme, drug requirements were estimated and procurements were initiated to ensure availability for at least 90 days. Also, a state-level review of nodal officers and district NCD cell staff was conducted this year in the months of March, April and May. In addition, trans-fat component was included in the Maharashtra Obesity and Diabetes Task Force and opportunistic screening was improved due to the orientation of staff redesigning patient flow and availability of BP monitors.

Some of the initiatives taken by the state government involved: constituted Hypertension Policy Task Force for finalisation of Standard Treatment Protocol in a consensus workshop, inclusion of HT Protocol drugs in Essential Drug List (EDL), regular review of IHMI along with NPCDCS and (iv) approved expansion of IHMI in phased manner in Thane, Palghar, Ratnagiri, Nagpur, Chandrapur, Gondia, Pune and Nashik for the financial year 2019-20.

Identifying the challenges, Dr Patil said, “Delay in procurement of protocol drugs is a challenge, along with down referral and treatment continuation of HT patient at HWCs due to drug availability and vaccines of CHOs. Apart from it, availability of adequate functional BP monitors at health facilities is another major challenge.”

“Forecasting and timely procurement of drugs so as to avoid gaps in drug availability, community engagement for raising awareness about NCD and importance of treatment continuation, and helping patients to remain on treatment through involvement of society/family will lead to better performance of the programme,” he concluded.

To enlighten the audience on the application of the IHCI programme in the state,
Dr Saurav Purohit, State NCD Officer notified that the project was implemented on April 7, 2018 in three districts, namely Bhopal, Chhindwara and Ratlam, with a total of 33,662 people registering for it. He further said, “Out of 167 health facilities in the state, 93 per cent are implementing IHCI.”

Speaking about blood pressure control, he told the audience, “Among 15,161 patients registered in 2018, 26 per cent achieved control, nearly half were lost to follow up and the control was highest in Ratlam due to one high-performing facility.” He also highlighted that drug supply chain was streamlined to improve the availability of protocol drugs for more than three months in all the IHCI districts, along with the use of professional digital blood pressure monitors and state-specific protocol in all 51 districts through HWCs.
“Medicine distribution from the same NCD clinic for a month and posting of 60 trainee nurses from three nursing colleges at 21 facilities has also been done,” he added.

The pain points include lack of dedicated/designated paramedical staff at facility, lack of professional digital BP monitor availability and streamlining patient flow management according to each health facility, amid others.

For improving the programme, Dr Purohit suggested more dedicated manpower is needed. Also, according to him, linking of PBS and IHCI-HWCs can be helpful in primary case settings and use of IT platform will help in addressing the defaulters, inter-health facility transfer, effective supervision and ease of reporting.

With the implementation of the IHCI programme in the state on January 1, 2018, Punjab was the first state to introduce IHMI, informed Gurinder Bir Singh, State Nodal Officer, NPCDCS. He further stated, “Drug supply was streamlined to ensure that drugs for six to nine months were available and staff nurses were recruited to fill vacant positions.”

Counting the key achievements, he notified that the state has a streamlined medicine procurement and distribution – weekly medicine stock update through SMS. Six, three, six, three and one staff nurses have been recruited in Bathinda, Mansa, Gurdaspur, Hoshiyarpur and Pathankot, respectively; and a total of 41 HWCs are implementing IHCI. Apart from it, proposal of ASHA incentive in PIP, involvement of RMOs and ESI hospitals are a few other accomplishments for the state.

According to Singh, the problems faced while implementing IHCI included limited ANM support for PBS, lack of adequate human resources for opportunistic screening in high-volume facilities and poor follow ups due to low awareness. Also, while there was a requirement of 47 counsellors, only 13 were available.”
Amid some of the things that the state now looks forward to are, utilisation of rural dispensaries, line listing of hypertensives by ASHAs and monitoring and review at every level in terms of coverage and governance.

Ayushman Bharat needs to be driven by technology disruption or innovations

Aster Labs: The new baby on the block

AMR is a concrete threat to our future health