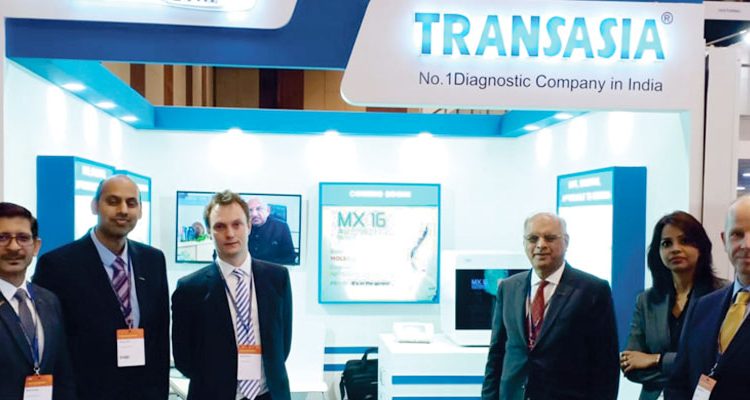 Developed by Erba Molecular, MX 16 is a fully automated nucleic acid extractor, which was unveiled at 50th Union World Conference on Lung Health and TB in Hyderabad

Transasia Bio-Medicals recently announced that it will soon be foraying into the Rs 300 crore Indian molecular diagnostics space. It unveiled the MX 16, a fully automated nucleic acid extractor, at the 50th Union World Conference on Lung Health and TB in Hyderabad. The MX 16 has been developed by Erba Molecular, a UK subsidiary of the Transasia-Erba Group.

The new system will offer an easy-to-use and lower priced molecular TB test in India, with the goal of replacing traditional smear microscopy. The system will be particularly beneficial to India, which has the highest burden of TB and drug-resistant TB: One in four TB patients globally are in India. Also, 89 per cent of affected individuals in India are in the productive age group 15-69, which makes it a critical national health issue to be addressed. Though TB incidence in India has been declining at 1.7 per cent annually since 2016, it is estimated that it needs to fall by 10 per cent annually to reach the Government’s 2025 goal of ending TB in the country. Currently a significant number of TB patients remain undiagnosed for long and out of those diagnosed, only 65 per cent of cases in India are treated. According to the Tuberculosis India Report 2019, there has been a 16 per cent increase in cases compared to 2017, further raising the need for early, simple and accurate diagnostics, which is a crucial element of any successful strategy to address TB in India. To this effect, Molecular testing has been included in first ever Essential Diagnostics List announced in 2018 by the WHO, further stressing the need for timely diagnosis of TB.

Announcing the foray, Suresh Vazirani, Chairman and Managing Director, Transasia-Erba International Group said, “Erba Molecular in UK is among a handful of companies in the world having state-of-the-art, proprietary molecular diagnostic technology. The unveiling of MX 16 and our upcoming entry into the molecular diagnostics segment in India, is part of our commitment to bringing the best in IVD globally to benefit the Indian public. We have also been careful to ensure the forthcoming MX 16 system offers better sensitivity compared to others in the space, with a target price which is significantly lower, to ensure access to early, accurate TB diagnosis. With 21.5 lakh cases reported in 2018 and many more that remain undiagnosed, I personally think it is the right time for us to introduce our molecular range and we look forward to partnering with the health ministry for a TB- free India.”

In his comments, Dr Laurence Tisi, President, Erba Molecular, said, “Our technology makes molecular diagnostics less complex and replaces the age-old smear microscopy method for TB detection. With 75 per cent reduction in processing time and the ability to run 16 samples concurrently, MX 16 allows for faster Turnaround Time (TAT). It is fully automated, with a protocol incorporating a unique kill step that enhances lab worker safety during sample preparation. The new solution from Erba will help deliver easy and faster diagnosis, a big benefit in densely populated countries like India.”

He further added “We are also planning to bring in Nex-Gen sequencing and other advanced technologies which extracts genetic information from patients and helps to plan treatment needs. The presence of large patient pools suffering from infectious diseases like TB and HIV has created an immense unmet need for superior diagnostic technologies. With current tests prone to delivering false results because of lack of sensitivity, we are working on a comprehensive suite of molecular testing products for other infectious diseases and cancer markers which will use the same MX 16 platform.”

Vazirani further added, “Emerging markets like India are the main focus of Transasia-Erba Group as they face a higher burden of TB and the challenge of drug resistance. MX 16 being a flexible molecular platform, we plan to add more menus in the future to make it a comprehensive molecular solution. Our ambitious goal is to offer TB test automation at under $10. The initial response has been highly promising. The team at Transasia-Erba Group is truly proud of developing a solution that directs the power of molecular testing to the increasingly important battle of a TB-free future.”

As we celebrate the silver jubilee of Pulse Polio programme, it is time to now envision new dream of not letting even one child or pregnant woman die from Vaccine Preventable Disease (VPD), says Health Minister