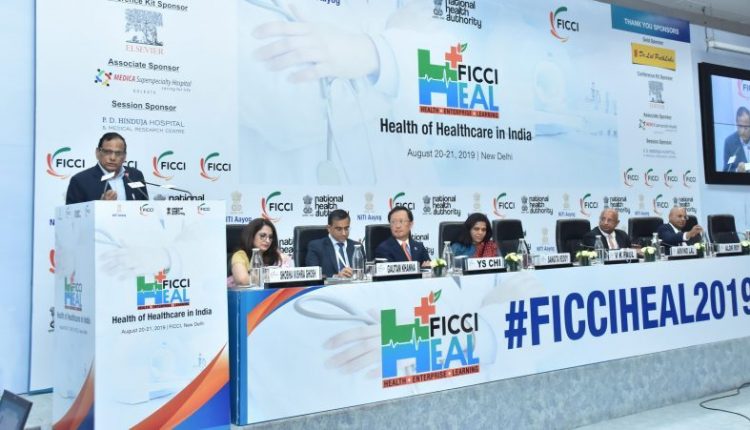 Dr VK Paul, Member (Health), NITI Aayog, Government of India said “The public and private sectors in the healthcare sector have come together and are fully committed to serve the people of India.” Speaking at ‘FICCI HEAL 2019 – Health of Healthcare in India’, organised by FICCI supported by NITI Aayog and National Health Authority.

“Most important highlight of Ayushman Bharat is that it has now finally established ‘One India, one nation, one health sector’. Private-public demarcations are over once and for all. We are working together on agreed terms and methodologies through dialogue and systems with an endeavour to find solutions to the challenges of our healthcare system” said Dr Paul.

Dr Paul said that over the last year, country has added 25 per cent additional MBBS seats, which is unprecedented. “From about 60,000 MBBS seats last year, this year we have about 76,000 seats and actually a potential of about 80,000 seats,” he said.

He also said that strengthening human resources for the health sector is the key focus of the government, for which it does not differentiate between public and private sectors.

The government is working to establish 75 additional medical colleges in the next 4-5 years largely through PPP models for district hospitals and other mechanisms. This is in addition to the creation of 82 medical colleges that began five years ago.

“The emphasis on human resources in this government is profound. If you consider Ayushman Bharat to be the highlight of the Independence Day speech of Prime Minister last year, this year for the health sector he only spoke about human resources, which has gained centrality in the development agenda of the nation,” added Dr Paul.

Dr Paul further said that with the reforms in the health sector, a consortium of private players can now set up a medical college unlike in the past when a medical college had to be established by a single entity. He urged the private sector to use their resources for training specialists to help achieve the aspired numbers.

Sangita Reddy, Senior Vice President, FICCI and Joint MD, Apollo Hospitals Enterprise said, “Ayushman Bharat is transformational for the country. Now we need to up the dialogue on healthcare further and converge the power of Ayushman Bharat with the viability for the sector to make quality healthcare sustainable.”

Dr Arvind Lal, Chair, FICCI Health Services Committee and CMD, Dr Lal Pathlabs said, “As the country aims to become a $ 5 trillion economy, healthcare industry will play a major part in building a prosperous and a healthy India.” Dr Lal added “Fund allocation to the North Eastern states has shot up by almost 250 per cent over the last five years. Imagine if this was to happen in healthcare. We urge the government to increase the public health spend to at least 2.5 per cent, as envisaged in the National Health Policy 2017 and preferably to 3 per cent, at the earliest.”

Health Dialogue 2019 by OPPI to be held in Delhi