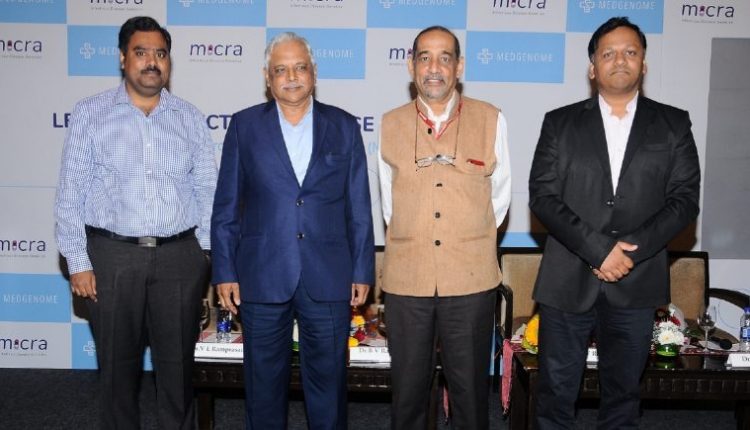 The test is based on whole genome sequencing of mycobacterium tuberculosis to assess mutations in bacteria’s genome, it allows clinician to determine which drugs will work for a patient

MedGenome Labs- a genetic diagnostics and drug discovery research company has developed ‘SPIT SEQ’, a Whole Genome Sequencing based test that can provide a detailed analysis of every single mutation present in any tuberculosis bacteria causing drug resistance-directly from the sputum. This break-through will enable a doctor to quickly and accurately prescribe the most effective drug to a tuberculosis patient without a trial and error process, followed currently that takes a month.

India has the largest number of multi drug resistant (MDR-TB) TB cases. SPIT SEQ can be a boon for TB patients, clinicians and healthcare agencies to achieve India’s Sustainable Development Goal (SDG) of elimination TB by 2025. The test is based on whole genome sequencing of mycobacterium tuberculosis (MTB), the TB causing bacteria, to assess the mutations in bacteria’s genome and allows a clinician to determine which drugs will work for a patient.

This test has been validated with over 100 samples where it recorded with 100 per cent sensitivity and 98.04 per cent specificity when compared with Line Probe Assay (LPA). 50 out of those samples were in association with PD Hinduja Hospital and Medical Research Centre, Mumbai. A manuscript is under review for publication. Typically, the process of analysing the drug resistance is very long which delays treatment for MDR-TB patient. Here as well, the current expertise allows testing resistance only on four drugs hence the patient had to wait until testing on all possible drug concluded. In such a situation, where long turn-around diagnosis time, repeated testing led to multiple changes in the course of treatment along the way.

According to WHO report, there were 2.7 million TB cases (incidence + relapse) in 2017 and India accounted for 27 per cent of global TB deaths. Second most appalling insight is that globally, 3.5 per cent of the new TB cases and 18 per cent of previously treated patients suffered from relapse due to the immunity developed by tuberculosis bacteria. The conventional tests available in the country equip us to identify resistance in a limited fashion. Mtb (Mycobacterium tuberculosis) is slow-growing, taking 6-8 weeks for culture growth, thereby delaying not only TB diagnosis but also the drug resistance testing. SPIT SEQ is a culture-free WGS (whole genome sequencing) method for identification of Mtb and prediction of drug resistance with a turnaround time of 10 working days. Another strength of WGS over rapid molecular tests (LPA) is in the resolution of non-interpretable (NI) results that occur when a locus of interest has neither the wild type nor the specific mutation of interest present. A total of 12 such mutations were detected by our SPIT SEQ WGS test which was missed by LPA.

“SPIT SEQ is a massive breakthrough that can help millions. This particular test not only brings accurate results but also saves a lot of time where TB treatment is concerned. In lines with India’s objective to counter TB effectively and quickly, we aim to benefit the last person living with TB today”, said Dr VL Ramprasad, COO, MedGenome Labs.

With the flagship test for tuberculosis ‘SPIT SEQ’, MedGenome Labs is entering into infectious disease genetics and collaborating with XCyton Diagnostics, Bengaluru. This collaboration will boost integration of various genetic tests under infectious diseases available with XCyton through the network established by MedGenome Labs. These tests include eye infections, brain and blood infections. MedGenome will be the exclusive sales partner for all XCyton tests in India. “Infectious diseases remain a major challenge, leading to significant healthcare expenditure, for India. This partnership can act as a synergy in India’s quest against infectious diseases. MedGenome’s reach across India’s geography will prove to be pivotal in the success of integrating genetic testing in healthcare service segment while we at XCyton continue to be focussed on research and development of current as well as new tests.” said Dr BV Ravikumar, Founder and Managing Director, XCyton Diagnostics.

“Our ultimate objective is to bring down the burden of healthcare we have currently. It is possible if we are able to harness the power of genomics completely and mainstream that into our healthcare ecosystem. Globally, Genomics is a well-recognised field that fuels innovation not just in diagnosis but also in drug discovery. While India is steadily moving in that direction, collectively we need to acknowledge its potential and leverage upon the same”, added Ramprasad.

Present at the event were Dr Sachin Suresh Jadhav, MD DM, (Clinical Haematology), Group Head, Haematology and BMT, HCG Group of Hospitals and Dr V Ravi, Senior Professor and Head, Dept. of Neurovirology, NIMHANS who explained and highlighted the vulnerabilities to infections and stressed upon the integration of genetic tests in everyday practice to counter that effectively. “Resistance to antibiotics is not uncommon and is now recognised as an emerging public health concern demanding attention. There are multiple recorded examples of multi-drug resistant fungal infections responsible for mortality as high as 40 per cent in organ transplantation. While there are tests existing to examine the state of a patient, ignorance and delays in initiating effective therapy has led to loss of life. Early diagnosis and prompt microbiological tests and crucial to save lives”, said Dr Jadhav. Amongst all infections of human beings blood stream infections (Sepsis) and infections of the brain (Meningitis and encephalitis) pose the greatest challenge to physicians. Firstly, they are serious, life threatening infections with high morbidity and mortality, secondly, they provide a very small window (72 hours) for diagnosis and appropriate therapeutic intervention and lastly a large number of micro-organisms are known to cause these infections. It is in this context, that experts came together for the development of the Syndrome Evaluation System (SES) for both these life-threatening infections to develop a diagnostic assay that can simultaneously detect a number of micro-organisms that are known to cause these infections within a few hours and wherever possible provide the antibiotic susceptibility of the organisms especially in blood stream infections.

It has been extensively validated at several reputed institutions in the country such as NIMHANS, St Johns Medical College Hospital etc. before it was put to use in the clinical arena. There are several publications in reputed journals that have evaluated the highlighted utility of this technology. Although SES was initially intended to meet the diagnostic needs of clinicians, it became apparent after introduction into clinical practice that it is a powerful management tool that can save lives, reduce morbidity and hospitalisation costs”, said Dr V Ravi

International Congress on Oncology Research and Development to be held in, New Delhi