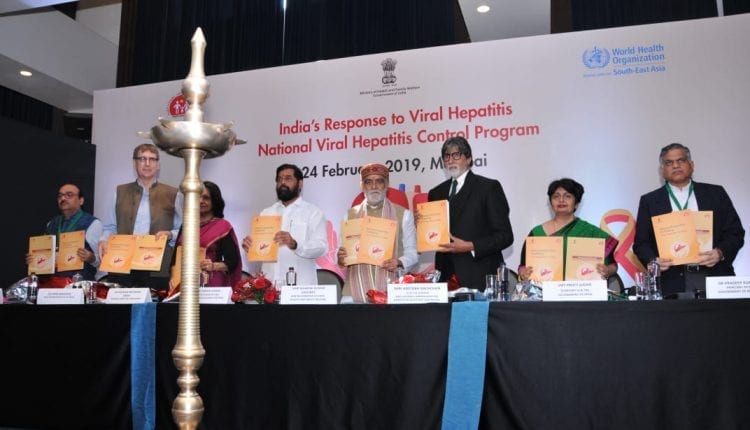 In line with the Government of India’s deep commitment towards elimination of viral hepatitis, the ‘National Action Plan – Viral Hepatitis’ was recently launched by Union Minister of State, Health & Family Welfare, Ashwini Kumar Choubey in Mumbai. Minister for PWD and Public Health & Family Welfare, Government of Maharashtra, Eknath S Shinde; and Guest of Honour and Goodwill Ambassador for Hepatitis, WHO SEARO region, Amitabh Bachchan were also present on the occasion.

The National Action Plan was developed by experts from across the country, in line with India’s commitment and keeping the global perspective in mind. The plan provides a strategic framework, based on which National Viral Hepatitis Control Program was framed and launched in July, 2018 under National Health Mission by Ministry of Health & Family Welfare. This programme is also in line with the global commitment towards achieving Sustainable development Goal (SDG) 3.3. India has affirmed this commitment at the 69th World Health Assembly.

The aim of the programme is to combat hepatitis and achieve countrywide elimination of Hepatitis C by 2030, achieve significant reduction in the infected population, morbidity and mortality associated with Hepatitis B and C viz. Cirrhosis and Hepato-cellular carcinoma (liver cancer) and Hepatitis A and E.

The minister also released the Technical Guidelines for Diagnosis and Management of Hepatitis B. Another important strategy adopted by the program is propagating the use of Re-use Prevention (RUP) syringes in the country. The NVHCP website was also launched on the occasion. 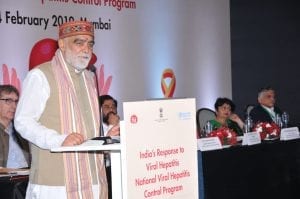 Addressing the gathering, Choubey said, “Today, we have taken a pledge to fight hepatitis; while we have done this in the presence of hundreds of people, the message should go to crores of people. This is important as one needs to maintain one’s health in order to be able to contribute to the society and to the nation. The launch of the National Action Plan – Viral Hepatitis takes forward the National Viral Hepatitis Control Program launched by the Union Health Minister in July 2018. The aim is to eliminate hepatitis by 2030. I am confident that the programme will be successful. India plans to have a decentralised health management for hepatitis, which is necessary for effective treatment. An integrated plan is being prepared, with the involvement of doctors, experts and state governments.” 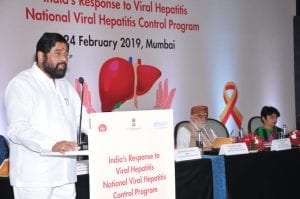 Shinde said, “I am quite confident that we will win the battle against hepatitis through NVHCP. When the whole country comes together for a cause, nothing can stop us from winning. Globally, 32 crore people suffer from hepatitis and 13-14 lakh deaths happen annually due to the disease. However, statistical data for India is missing in this regard; there is a need to bridge this gap. Sustainable Development Goals for leprosy and polio have already been achieved; similarly, SDG for hepatitis would also be achieved. More than 151 health and wellness centres have been set up in the state under Ayushman Bharat, and more than 12,000 primary health centres and sub-centres in the state will be upgraded into health and wellness centres in the coming years.” 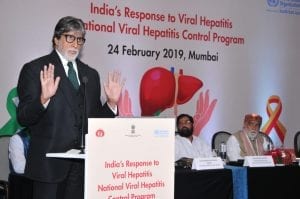 Bachchan said, I am here today because I am a Hepatitis B victim. While shooting for the film Coolie, I got injured and required a lot of blood; the blood given by 200 donors saved my life, but one of the donors was carrying the Hepatitis B virus. The detection process for that virus was not in order at that time, and that went into my system. This was discovered only in 2005, when I came to know that 75 per cent of my liver had been destroyed. I am a living example of a Hepatitis B victim. I want to know the impact of the campaigns; we had done a similar campaign against polio, and now India is now polio-free. I am a TB survivor too. If it can happen to me, it can happen to anyone since TB is normally regarded as a disease contracted by those living in disadvantaged backgrounds; however, if its treatment is done timely, it can be cured. We must pay a lot of attention to the process of detection of these diseases; because if it is detected in time, it can be cured.”

Bachchan further said, “I got very interested when I came to know about the programme by Government of India. The need for dissemination of information about Hepatitis B is one thing which attracted me to the programme. Secondly, the factor of discrimination, particularly against women, made me sign in to this programme. I had heard many painful stories where women suffering from Hepatitis are evicted from the family. Women are half the power of our country; to be discriminated against just because they are carrying a Hepatitis B virus is not acceptable. I will fight for this as long as I am alive.”

Secretary, H&FW, Preeti Sudan said, “This is a start to fight against hepatitis together. Hepatitis is increasingly being recognised as an important public health problem. In India, the estimated burden of hepatitis is high, necessitating focus on prevention and control measures to mitigate morbidity and mortality arising out of hepatitis.” 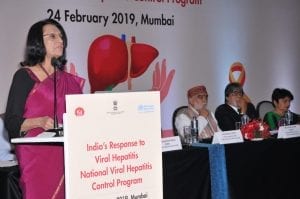 Dr Poonam Khetrapal, Regional Director, WHO, SEARO, said, “Today is a very significant day. The number of people suffering from Hepatitis B is very large in India. This will augment India’s remarkable work in improving the lives of those suffering from Hepatitis B. SDG 3.3 emphasises the need for all countries to strengthen their hepatitis programme. Government of India is also a signatory to the World Assembly Resolution 69.2 which aims to eliminate the disease from the world by 2030. India is the first country in the region to develop its own action plan for hepatitis, which is a notable achievement. India’s leadership is demonstrated in the comprehensive Programme launch last year, and the guidelines being released today, provide a guidepost to other countries for emulation. Mother-child transmission is the most common way in which the disease is spread; all blood donations must be voluntary and non-remunerative, thereby reducing the risk of blood-borne infections of hepatitis B. There is also a need to increase public awareness, given that only one in 10 people know of their hepatitis status. India’s efforts in this regard have been very inspiring.”

Khetrapal added, “Just 3-5 per cent of those with hepatitis have been diagnosed; we need to scale up the programme, and reach those at risk. We look forward to the full implementation of the guidelines being released today, and their phased introduction into the health system of India. I thank Amitabh Bachchan for his commendable contribution in spreading the message of hope in battling hepatitis. I am confident that we will together win the battle against the disease.”

WHO Representative for India, Dr Henk Bekedam said, “Hepatitis is very clearly on the agenda. The Ministry for Health & Family Welfare has moved very fast. The initiative launched on World Hepatitis Day is a great and comprehensive plan. It is wonderful to see India taking these efforts. Those in the Ministry raised the point that we do not have data on the number of people suffering from Hepatitis B. I commend the Ministry for taking the initiative to prevent Hepatitis B as well. Clean India is very important in this project. In a country where there are more than 4 million injections every year, making the injections safe would be an important step forward. The price reductions achieved in the vaccines is remarkable. The Action Plan is yet another initiative in ensuring a healthier India.”

Earlier, Joint Secretary, MoH&FW, Vikas Sheel welcomed the audience and thanked all stakeholders who have contributed to the initiatives being launched today. The cost of treatment for Hepatitis B for one patient has come down to almost 35 dollars per course, from 800 dollars per course earlier. The Government of India has allocated Rs 907 crore for this program for the next three years.