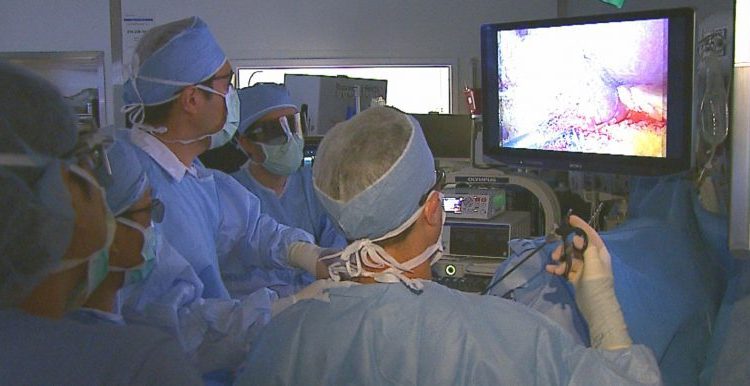 Cleveland Clinic has successfully performed its first purely laparoscopic living donor surgery for liver transplantation in an adult recipient. The advanced procedure is available at only a few hospitals worldwide.

Unlike open surgery that requires a large incision to access the liver, the laparoscopic procedure is performed with surgical tools and a camera inserted through a few half-inch holes in the abdomen of the living donor. Once the piece of the liver is dissected, the surgeon retrieves the graft through a small incision below the navel. The minimally invasive technique benefits the living donor, who experiences better postoperative recovery and a quicker return to normal life, less pain, smaller scars and lower risk of an incisional hernia compared with traditional open surgery.

About five percent of people who undergo a liver transplant receive the organ from a living donor who has made the altruistic decision to give up a portion of their liver to save someone else’s life. The liver is the only organ that can regenerate, which makes it possible for a living person to donate a portion of their liver. It can take six to eight weeks for a healthy liver to grow back to its original size.

On August 19, Choon Hyuck David Kwon, Director of Laparoscopic Liver Surgery, Cleveland Clinic’s Digestive Disease & Surgery Institute, led a team of surgeons and nurses during the minimally invasive procedure that extracted a third of the liver from a 29-year-old living donor.

In an adjacent operating room, Koji Hashimoto, Director of Living Donor Liver Transplantation, Cleveland Clinic and his team received the donated segment of the liver and performed the transplant in a 66-year-old recipient. Due to an irreversible liver disease called cryptogenic cirrhosis, the recipient was suffering from life-threatening complications and needed a liver transplant.

“The most important aspect of a living donor liver transplant programme is the safety of the donor. We have strict selection criteria and standards in place to determine the best surgical approach for a given living donor – whether it is minimally invasive or open surgery. With the laparoscopic technique, the donor gets the benefits of minimally invasive surgery, resulting in shorter postoperative recovery time, less pain, better cosmetic results and lower risk of an incisional hernia,” said Dr Kwon.

“Living donor liver transplantation can save sick patients before they become too ill for a transplant. Patients on the waiting list to receive a liver from a deceased donor experience serious symptoms of chronic liver disease that affect their function and quality of life. If they identify a healthy living donor who is a good match with compatible liver anatomy, the surgery can be performed within a shorter waiting time. Living donor liver transplantation provides the best opportunity for patients in a timely manner,” said Dr Hashimoto.

Impact of GST under NPPA orders