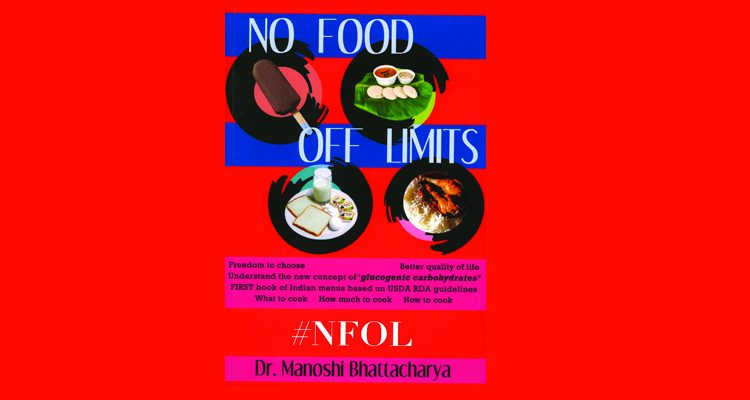 In her book, No Food Off Limits, physician Dr Manoshi Bhattacharya reasons that how much (portion size) is as important as the what (ingredients) and how its made when it comes to cooking healthy tasty food for diabetics. Under medical supervision, diabetics and their caregivers could use this workbook as a base guide to modify their favourite Indian recipes and methods of cooking into meal plans which are appetising as well as healthy BY VIVEKA ROYCHOWDHURY

Let food be thy medicine, and let medicine be thy food. This oft used quote, attributed to Hippocrates, sums up the approach of No Food Off Limits. The author Dr Manoshi Bhattacharya introduces her concept of glucogenic carbohydrates and claims that it is the first book of Indian menus based on the US Department of Agriculture Recommended Daily Allowance USDA Recommended Dietary Allowances (RDAs) guidelines.

Designed as a slightly weighty book of recipes, with appetising photos of yummy looking food, the book is based on the author’s experience of cooking and caring for her diabetic mother. She set out to understand why familiar Indian foods, and not imported fast foods, had turned our country into the diabetes capital of the world. The book is built on the principle that how much (portion size) is as important as the what (ingredients) and how its made when it comes to cooking healthy tasty food. Thus the recipes are based on familiar Indian preparations, the difference being that the author specifies the grammage for each ingredient, even the spices. It uses the çooking-for-one’ concept, allowing individual preferences to be included in the preparations and daily meal plan.

The book is about ‘bridging the gap between the world of allopathic medicine and the world of eaters’ and using ‘food as medicine.’ While that may conjure up visions of uncontrolled gorging, the disclaimers placed in prominent places across the book quickly burst this bubble. As a responsible physician, starting out her journey with the Indian Navy no less, the author makes physician supervision mandatory for patients on diabetes medication as the menus-for-the-day can cause hypoglycaemia for such patients.

The flip side to using ‘food as medicine’ is that like medicines, food need to be consumed in a controlled manner, with due thought given to the recommended balance of carbs, proteins and fats. A huge benefit of the book is that it speaks the language of the patient/consumer, relating concepts of nutrition tailored for western foods to Indian staples like idli, rotis, etc.

The author draws on a series of papers authored by her over the years, which explain the basis for this approach. She starts by analysing changing patterns in our diets, joining the dots from a gradual shift over the centuries from the Pastoral Age diet of large quantities of high-fibre carbohydrates, small amounts of digestible carbohydrates, moderate fats, moderate proteins, to an increasing and frequent intake of high-fibre carbohydrates associated with significant drop in protein and fat consumption between 1775 and 1947. 1947 onwards saw an increase in the frequency of intake and quantities of low-fibre and refined carbohydrates, and fats with protein intake improving only marginally. (Bhattacharya M. A historical exploration of Indian diets and a possible link to insulin resistance syndrome, Appetite 95 (2015) 421e454) Another review paper explains the need for a new term for practical eating: ‘Carbohydrate’ – fiber = Glucogenic-Carbohydrates. When expressed in grams to be consumed in a day, it makes it easier for practitioners to prescribe weights of raw plant produce and for patients to comprehend the instructions. (Bhattacharya M. A history of evolution of the terms of carbohydrates coining the term ‘glucogenic carbohydrates’ and prescribing in grams per day for better nutrition communication. J Pub Health Catalog 2019;1(4):1-8) And in a third communication, she makes the point that Indians are not developing diabetes only by the same culprits identified in the west: sugar, white flour, potatoes and processed foods. She suggests that the way out is to prepare several traditional menus-for-the-days for each of the 36 ethnic regions of India, de constructing them into the weights of raw ingredients to be used. These weights can be adjusted to deliver the grams of macro nutrients per day deemed ideal for the patient by his doctor. Such a system allows patients and their care giver to cook their meals in the styles they are used to, with slight modifications to the process and in marginally different proportions. (Bhattacharya M. Calculate weights of raw-ingredients that go into customized menus for the day, to prescribe recommended grams of glucogenic-carbohydrate, fiber, protein and fat, instead of counting calories. J Pub Health Catalog 2018;1(4):108-111) Today, there is support for the proposal to use ‘food as medicine.’ For instance, the American Diabetes Association (ADA) emphasises that medical nutrition therapy (MNT) is fundamental in the overall diabetes management plan, and the need for MNT should be reassessed frequently by healthcare providers in collaboration with people with diabetes across the life span, with special attention during times of changing health status and life stages. (Nutrition Therapy for Adults With Diabetes or Prediabetes: A Consensus Report Diabetes Care published online on April 18, 2019) Content wise, the book starts with an explanation of studies conducted in the West, putting them into the Indian context. The myth-buster double spread has some surprises in store. For example, dals have twice the amount of glucogenic-carbohydrates than protein so its a myth that they do not raise blood glucose. It transitions into a cook book, starting with a list of seven menus-for-the-day with a nutrient analysis, covering a regional flavour per day. It starts with a North Indian menu on Sunday, while other days feature recipes from Bengal, Kashmir, UP and Punjab, South India as well as a continental menu plan. The recipes include tips like first immersing potatoes sliced for finger chips in water to allow the starch to leach out, reducing the carbohydrate content. I am sure at least some of us do this but now we know the benefits.

The book has a detailed bibliography which will be useful for doctors and clinical staff. Most importantly, the book has testimonials, (a fair number of whom are doctors themselves), which will inspire patients to stick to the plan, even when it is more tempting to fall back into traditional cooking habits.

As clearly stated in the book, accurate weighing is the crux of this work but this could prove tedious to follow over a prolonged period of time. Most of us cook by instinct, balancing the spices and ingredients by past experience. Not too many users will weigh each raw ingredient, the cooking dish and then the cooked item itself so complete adherence might be a problem. But the book was eight years in the making and the author’s exhaustive efforts must be appreciated.
More importantly, we need to make these changes for the sake of the next generation. We are leaving them a legacy of diabetes. We cannot do much about the genes we pass on but we can also pass on a tool kit to deal with them. Healthier habits can only be passed on by leading by example and not a will drawn up by the family lawyer. We need to therefore ingrain them in the next generation.

The foreword from Prof Bernadette Nirmal Kumar, President, European Public Health Association, Section for Migrant and Ethnic Minority Health, and a commissioner on The Lancet Commission on Migration and Health 2018 has a very pertinent quote from WHO Director General Dr Tedros: “If we are to win the war against premature deaths caused by NCDs, we must also win the battles in our kitchens, shops, supermarkets, restaurants, schools and lounge rooms.” Dr Bhattacharya’s book No Food Off Limits is an important step in this journey.