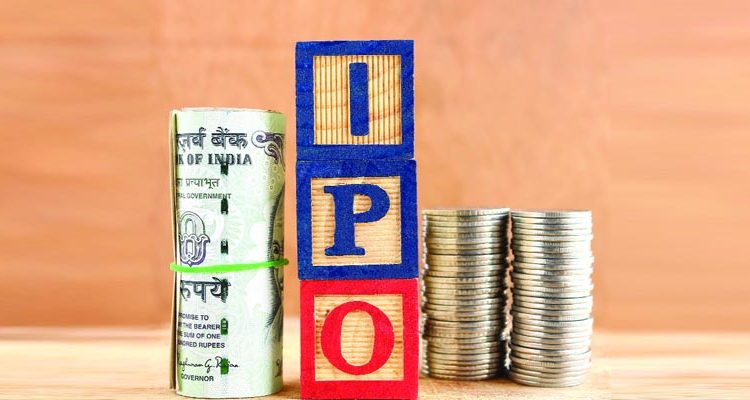 Metropolis Healthcare took a long time to go down the IPO despite being one of the early initiators of corporate diagnostic chains in India. But, with a proven track record of consistent performance, the success of its IPO is expected to spur the diagnostic major towards greater heights

The diagnostic sector too has got on this bandwagon and several leading players in this segment has opted for this route to further their growth trajectory. A recent entrant was Mumbai-based Metropolis Healthcare. On April 15, 2019, the scrip got listed at Rs 960 on the Bombay Stock Exchange, a 9.09 per cent premium over issue price of Rs 880 per share.
As of April 26, 2019, Metropolis Healthcare had a market capitalisation of Rs 4,746.15 crore (Source: BSE) at a closing price of Rs 945.85 per equity share. The IPO valuation was around Rs 4,415 crore (Rs 880 per equity share).

In FY 2019, the company posted consolidated revenue growth of 18.1 per cent, registering an increase in revenue per patient (5.4 per cent) and revenue per test (8.5 per cent). EBIDTA before CSR and one-time share based and other expenses were at Rs 2073 million in FY19. It posted a PAT before CSR and one time share based and other expenses at Rs 1308 million. Earnings per share was reported at Rs 24.06. Thus, the company made a decent market debut.

Why did the Metropolis IPO succeed?

Well, Metropolis Healthcare, a professionally-managed and promoter-led company, is a leader in this segment with presence across 19 states in India in the Western and Southern region. The company has also developed a highly differentiated and focussed growth strategy of dividing the key target cities in which it operates. 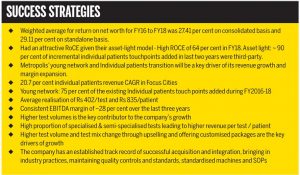 Ameera Shah, Managing Director of Metropolis, explains, “The listing post IPO at a premium is a testimony to our competitive strengths and attractive financial profile. Being one of the leading diagnostics companies in India, we are well positioned to leverage the expected industry growth. We have a widespread operational network, young patient touch point network and asset-light growth of service network. Besides this, we have a strong and established brand known for its quality, good customer service and robust information technology structure.”

So, what’s next in its growth trajectory?

From here on, Metropolis Healthcare has a clear vision to further its growth. Shah disclosed their vision saying, “Our company expects that listing of the equity shares will enhance our visibility and brand image and provide liquidity to our shareholders.”

According to her, the IPO will be instrumental in achieving the key goals of the company in future while charting the right path in this direction. Some of the key focus areas in this direction will be:

Many companies pursue IPOs as a means to increase the amount of available financing
to the company and possibly generate billions for the owners in the process. But with it comes a lot of risks. Metropolis took certain initiatives to prevent the associated risk factors before going in for the IPO. 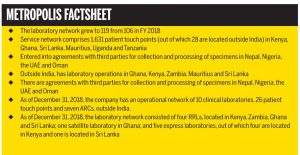 Other risk factors are limitation of trained human resource availability; vulnerability to technological advancements, challenge in entering new geographies, capability to launch new tests, pricing pressures, capability to optimise operational expenditures and lack of a comprehensive and stringent government regulatory framework. Thus, the road to progress is not without its hurdles. So, how would this diagnostic player overcome them?

The next phase of growth

Metropolis is giving a special focus on organic growth initiatives to expand its reach. As mentioned earlier, the company has differentiated and focussed growth strategy of dividing the key target cities. It has identified five ‘Focus Cities’, for the financial year 2019. These are Mumbai, Bengaluru, Chennai, Surat and Pune.

According to Shah, “We have a significant presence and operational experience in these five focus cities, and derived 58.78 per cent and 62.75 per cent of our revenue from operations from these cities for the nine months ended December 31, 2018 and financial year 2018, respectively. We intend to deepen our penetration by increasing the number of Third Party PSCs, enhancing our laboratory capacity and test menu by adding latest machines and technology, expanding business derived from individual patients, employing focussed sales and marketing teams to generate walk-ins through targeted marketing strategies and use of the customer relationship management (CRM) marketing tool, doctor engagement through medical awareness initiatives and meetings with medical practitioners; and increased focus on home collection service and wellness offerings. We intend to evaluate the list of focus cities on a yearly basis to ensure that our resources are deployed in line with our growth strategy.”
Shah mentioned about ‘Seeding Cities’, which are expected to have strong growth potential. The ‘Seeding Cities’ are Rajkot, Nashik, Nagpur, Kochi, Raipur, National Capital Region (NCR), Kolkata and Guwahati.

‘Seeding Cities’ constituted 18.77 per cent and 19.14 per cent of Metropolis’ revenue from operations for the nine months ended December 31, 2018 and financial year 2018, respectively. Given the expected increase in demand for diagnostic services in the ‘Seeding Cities’, the company expects them to be the core focus of medium to long-term growth. The company plans to expand its network in those cities by increasing the number of patient touch points, expanding test offerings and employing targeted marketing strategies to grow its business.
According to Shah, there are plans to convert some of these Seeding Cities into Focus Cities, in a phased manner, after these cities meet internal benchmarks.

Metropolis, also has an eye on key cities, which can have the potential to become ‘Seeding Cities’ in the medium term. The other ‘Key Cities’ constituted 22.45 per cent and 18.11 per cent of the company’s revenue from operations for the nine months ended December 31, 2018 and financial year 2018.

Shah says, “We intend to use the asset-light model for expanding our service network in other Key Cities, with primary focus on growth of our ARC network to service institutional customers.”
Metropolis believes that quality and reliability of tests and services are critical to its success. The company’s vision is to help doctors treat their patients better and in order to do so, it has upgraded the technology for better quality, efficiency and reliability; consistent value addition to tests being offered; and has been promoting disease and disorder specific profiles, to allow doctors to receive comprehensive view of the patient’s disease status.

Further, the company to provide user friendly services has initiated the value-added services such as house calls, e-services, longer operating hours for patient touch points and call centres, and home delivery of test reports. With an intention to improve value-added services in order to make them more attractive for existing as well as prospective customers the company is actively involved in campaigns focussed on creating awareness of particular conditions such as cancer, lifestyle diseases, monsoon diseases, and the importance of periodic testing.

In recent years, the company has successfully used the Third Party PSC model to grow business and the total number of APSCs and D-APSCs have grown from 41 as of March 31, 2016 to 408 as of December 31, 2018. These models enable the company to see a growth in revenue by providing management and branding to Third Party PSCs, while benefiting from the extension of its network and brand presence in key geographies.

Shah says, “We also intend to grow our owned PSCs in ‘Focus’ and ‘Seeding Cities.’ We expect that a wider geographic reach will expand our customer base as well as improve our profitability by allowing us to better leverage our infrastructure. We will also continue to seek strategic partnerships with key third-party patient service centres in India, Africa and the Middle East to expand our geographic reach.”

There are plans to pursue scientific upselling of tests where it will help the company to increase the scope of test menu. Shah mentions, “We are also focussed on growing our portfolio of tests, with special focus on specialised tests which have less competition and higher margins due to advanced technology, skilled manpower and complex processes involved.”

Partnering with government: While the company has a good foothold in the private healthcare space, it has also partnered with the government to tap the public health sector.
The company also participates in select public-private partnership tenders. The company’s contract with National AIDS Control Organization (NACO) has helped it become one of the providers of HIV-1-Viral load tests. There are similar opportunities for PPP tenders in the African markets and the company intends to participate in these tenders on a selective basis.

Global expansion: As part of the company’s expansion plans, Metropolis in the past
recent years ventured into the global market. Apart from setting up a laboratory in Mauritius under the LIH model, there are agreements with third parties for collection and processing of specimens in Nepal, Nigeria, the UAE and Oman. As of December 31, 2018, it has a service network of 26 patient touch points and seven ARCs, outside India. The specimens that the company receives from these countries are imported in compliance with the Indian Council of Medical Research guidelines for the import of test specimens.

According to Shah, “We will also continue to seek strategic partnerships with key third-party patient service centres in India, Africa and the Middle East to expand our geographic reach. Our key approach will be profitable growth.”

Ensuring value for customers: Metropolis wants to constantly enhance value for their shareholders through differentiated strategies, tried and tested execution and high standards of corporate governance.

According to Shah, B2C part of the business gives operating leverage and B2B business provides profitability. More than 40 per cent of the business coming from specialised tests.
She mentioned, “Our experience in diagnostic and related healthcare testing and services has allowed us to selectively combine diagnostic tests into diverse profiles to assist patients seeking to monitor their health and to prevent or treat diseases and other health conditions. These packages are a combination of a variety of early detection and diagnostic tests to screen selected diseases and disorders with primary focus on life style diseases. Based on age, sex, clinical history, parental history and affordability, there are options of several packages. Besides pathology tests, the packages also include non-pathology tests such as ECG, X-ray, ultra-sound and stress test. The reports issued by us include basic medical advice and are presented in a reader-friendly format.”

The way forward
Thus, through differentiated strategies, the company is striving to outperform industry pace of growth, which it has already demonstrated it in first nine months of FY19. Despite investments, the company’s average EBITDA was at around 27 per cent.

But, at the same time, thecompany will have to gear up to face increased competition as the sector continues to grow. Hence, it will be pivotal to stay relevant in the market by striking a balance between profitability and responsibility to outdo the challenges and adopt sustainable approaches to initiate, achieve, and foresee profitable growth for the future. The company needs to think big on expanding its customer base and venture into new regions, to sustain its success in the long run.

‘We envision to provide newborn hearing screening to every child’

Aster Labs: The new baby on the block