India has been making significant progress on expanding access to treatment 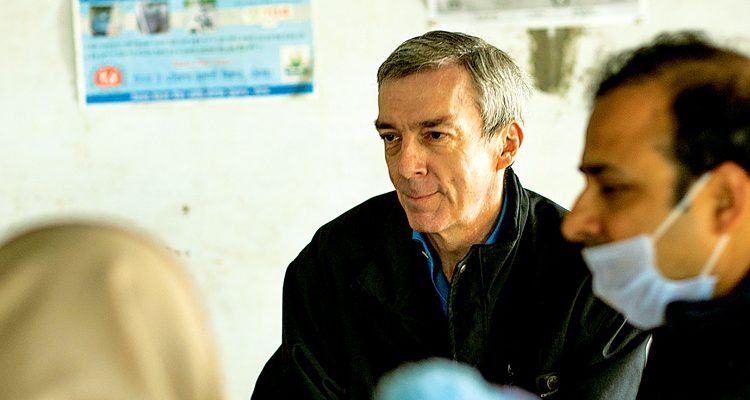 Charles Gore, Executive Director, Medicines Patent Pool, talks about the organisation’s supporting access in low- and middle-income countries and its ability to deliver quality and affordable medicines, in an interaction with Viveka Roychowdhury

You joined Medicines Patent Pool (MPP) as Executive Director in July 2018. As a recovered hepatitis C patient, how do you view the role of organisations like MPP in public health?
I originally got involved, in the UK in the 1990s, in hepatitis C advocacy because I had such difficulty in finding reliable information and appropriate support for myself and I didn’t want anyone else to have to go through the same struggle. Quite soon the advocacy became more about access to treatment as new medications became available and I became a passionate believer in the need to ensure access for everyone in need, whether they are marginalised people in developed countries or simply living in developing ones. Because, I was aware of what the MPP had achieved in HIV, when the organisation wanted to consult with the affected community and other civil society partners on whether to expand into hepatitis C, I was delighted to be able to facilitate that at the World Hepatitis Summit in 2015. That expansion has been absolutely critical in driving down the price of hepatitis C treatment. It is just an example of the central role that the MPP has in supporting access in low- and middle-income countries (LMICs). The MPP is not the whole answer to access by itself – access is far too multi-faceted and there are many other organisations with equally critical roles – but its ability to deliver quality, affordable medicines is a very important component of the answer. And the partnership approach with industry (both originator and generics) has proven to be a highly effective way to accelerate access to treatment.

What difference will you bring to the implementation of MPP’s 2018-2022 strategy which is being expanded beyond HIV, Hep C and TB?
I have a vision of a world in ten years’ time where no essential drug is launched without a comprehensive access programme that ensures that everyone who needs it gets access to it at more or less the same time, no matter where they live. To achieve that, we need to show that the MPP model works in essential medicines and is a viable access strategy. This is a current focus for us. At the same time, we will not diminish our work in HIV, hepatitis C and TB. In hepatitis C there is still much to be done, even when we have the licences, and in TB getting the licences remains a formidable challenge.

What could be the hindrances to achieving the targets by 2022? And how can these be tackled? (A funding crunch, lack of sufficient support from governments, etc?)
For two of our five 2022 targets, we are well on track to achieve them ahead of time: MedsPaL, our free online patent database (www.medspal.org) will have patent information on all patented medicines on the WHO Essential Medicines List by the end of the summer, once the new list is published by WHO; and prices for a 12- week course of curative hepatitis C treatment has already dipped below $50 in some parts of the world, notably South Asia.

With regard to new licences outside HIV, hepatitis C and TB, although we are well advanced in our process of prioritising essential medicines and beginning discussions with pharma companies about licences, these are new areas for us and there will be many challenges. It may be more difficult to get the broad territorial coverage we have achieved in HIV, at least in the beginning. Governments may be much less willing to commit money to supporting uptake, even if we can significantly reduce prices, since financing will have to come from domestic resources for the most part.

Civil society may not be as strong in some disease areas to generate the political will. Generic companies may therefore be less willing to take a licence with very uncertain demand. We believe all these challenges are surmountable, but we are likely to face them. As regards our target of 20 million people on MPP-licensed HIV drugs, we have the licences to make that happen. What we need is continued commitment by governments to diagnose people and link them to treatment. Our last goal of having a licence for a shortened pan-TB regime looks the most challenging. First the world needs to make the investments in research and development to ensure that there are promising new pan-TB regimens being developed to be licensed. To date, there has been a massive funding gap for TB R&D estimated at over $1.3 billion a year. While the pipeline does look more promising than a few years back, there is still a long way to go and there is a need for all stakeholders to live up to the commitments made last year at the UN General Assembly.

Your efforts towards awareness and advocacy were instrumental in getting the World Health Organization (WHO) to declare July 28 as World Hepatitis Day. Where are we in terms of achieving the goal of eliminating hepatitis B and C
by 2030?
WHO released a report in May on progress. It clearly shows that while some countries and some elements needed for elimination are on track, many countries and some particular areas such as harm reduction are perilously behind the curve. The report is a wake-up call for the world. There are only 11 ½ years until the end of 2030. That is very little time to develop an elimination plan, implement it and see the impact. Funding of course is often cited as a major obstacle. But it shouldn’t be. The basic tests for hepatitis B and C cost under $1, while in many LMICs curative treatment for hepatitis C is less than $100 and treatment for hepatitis B less than $40 per year, thanks in no small part to voluntary licences. These interventions are so cost effective every country should be thinking of including them in their basic Universal Health Coverage package and they should also be considered in terms of best buys for cancer prevention.

Similarly, what is you opinion of India’s progress on eradicating TB?
India, like many countries heavily burdened with TB, has been making significant progress on expanding access to treatment. I think the political will is there but there are huge challenges, one of which is the lack of a key tool – a short regimen that can be used for both drug-resistant and drug-susceptible disease.

Could you tell us about your recent field trip to India and the outcomes of MPP’s projects in India?
The MPP’s recent field trip to India was for us to understand and document the impact our licences have on the ground by meeting, talking to and, where appropriate, interviewing individuals affected by HIV or hepatitis C. We talked to a wide range of stakeholders such as doctors, government officials and broad civil society, but also of course Indian generic companies since they make up the majority of our manufacturing partners. To date, the MPP is less well known than I’d like, despite its extraordinary impact in enabling the delivery of more than eight billion doses of affordable, quality-assured, life-saving medicines. In order to expand successfully into new areas we need more people to understand the unique solution to access we offer and make use of it.

Malaria on the decline in WHO South-East Asia Region; efforts must continue as risks…