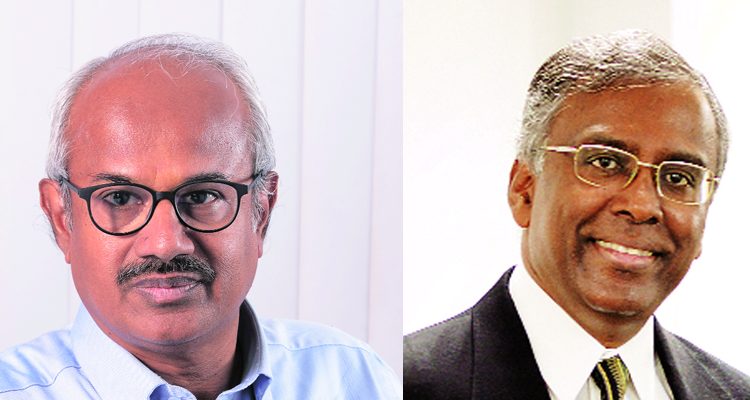 Why is it necessary for the Indian medical devices and diagnostics industry to be automated?

Sriram RD: There is a lot of work in the medical industry that needs to be automated like packaging and other activities of the same kind. Pharma industry is considered as the sector which is established in a better way and several machines remain fully automated. There is a lot of scope in the medical devices and diagnostic industry for automation via cobots as well. All the repetitive tasks can be handled by cobots in a highly safe ambience, while humans coordinate with them.

Labour-intensive jobs in our medical industry which include less logical or mindful applications, are automated in better ways.

How did you come up with this idea?

SRD: We were looking for a solution which will help in the process of pick and place, as our lenses need to be handled delicately. We thought of putting up a robot but that didn’t seem to be a safe option and it has to be caged. Eventually, we came across the concept of Collaborative Robots by Universal Robots safe for our staff to work with and this needs not be caged. Each lens is held accurately by a cobot, preventing any damage to the lenses.

Tell us about the potential for cobots in the healthcare domain?

Pradeep David: Collaborative robots, the fastest growing robotic technology is increasingly becoming the go-to automation tool in all sectors from manufacturing, auto, textile and now medical industry as well. Unlike traditional robots, cobots can be redeployed time and again for different applications and in different locations through its easy programming that takes only a few hours. All enterprises, big or small, that have deployed cobots, are seeing their businesses grow significantly. Cobots are one of the most affordable technologies, giving an ROI within the first few years of work.

Which is more in use – robots or cobots? What is the difference between the two? Which is more useful when it comes to diagnostics industry?

PD: Cobots are a much newer concept and in fact, they are a niche type of robots – ‘cobot’ is a portmanteau for ‘collaborative robot’. When we say collaborative, it means that it is safe to work with humans without the need for any caging, safety scanners, etc. (subject to risk assessment), unlike traditional robots. Due to this, they can work in close quarters with humans, sharing the same physical space as them. They are portable, easy to install, and easy to programme, unlike their bulky predecessors (industrial robots) that required much more space, time for deployment, and specialised programming knowledge. This makes them more than ideal for a multitude of applications. For example, Copenhagen University Hospital in Gentofte, Denmark uses cobots to ensure blood sample results are delivered as quickly as possible. Matternet in Switzerland has also implemented UR cobots in drone deliveries, to shuttle blood and other medical samples between hospitals and testing facilities.

How do robots help in precision of clinical decision?

PD: They are ideal for working as assistants of medical practitioners. There are a lot of examples of the same, for instance, one would be — a robot dentist in China which recently performed an hour-long surgery based on 3D printing of the structure. Some other examples include robots which are manufactured to remodel the operating rooms. The precision of the clinical decision is reflected in various such functions and applications of robots. The Broca project in Spain stands to justify how robots could be utilised in the best way possible. The Broca project is based in Spain, which has prepared a surgical robot to support medical practitioners. It allows surgeons to work with a secure and precise device that enables them to carry out operations that usually require laparoscopy surgery.

How receptive is the Indian diagnostics industry in being machine dependent, what does the future look like?

PD: We are definitely seeing a lot of traction here as more and more people are seeing the value propositions of collaborative robots. We have even made sales to various Indian medical universities and doctors who are doing R&D on how cobots can be used for various applications in healthcare, including neurosurgery and endoscopy.

With increasing automation and robots in labs, what will happen to skilled and unskilled workforce in medical diagnostic centres? How have you dealt with this?

SRD: There are many jobs which are performed by unskilled labour and they can’t be automated because of the complexities of the job profile; and we cannot completely eliminate low-end jobs for obvious reasons.

Although there is still a shortage of labour as many workers fly abroad for work or education. However, automation solutions like cobots are proven to be beneficial in the long term.

Talking of Aurolabs, workforce constitutes of 90 per cent of the women in our centre. We have been deploying cobots since 2012 to solve the issues of running late-night shifts, product variability, worker transition and the ergonomic challenges that the staff faced.

PD: The cobot is not designed to replace the human workforce, but to take over strenuous or even dangerous tasks. As a result, human employees can use their creativity to turn to more complex projects. For instance, when robots take over minor assembly tasks, employees can move on to more nuanced assignments that require human ingenuity. The fact that the cobot can be used as an extension of the human arm, cobots can be used for dangerous applications, where the human workforce might be at risk.

While low-end jobs are being eliminated, increasing automation does not have to negatively impact employment. Instead, the introduction of cobots almost always results in net job creation; human employees are being unburdened from performing repetitive tasks that may hurt them or present some ergonomic risk which cobots can perform with optimal speed, accuracy, cost and with no safety hazards.

How cost effective is automation? Give example.

SRD: Deploying cobots at our centre is economically viable as it has helped us in increasing the productivity and work-quality. Cobots is slightly cheaper as compared to hiring labour due to long term benefits of cobots. We have CNC lathe to grind the lenses. Each lathe cost us $160,000. We can’t risk the labour handling all of this on their own, hence, with cobots being programmed as per precision and speed, it becomes easier to work on it and also the best part remains that the inaccuracies with the manual method are eliminated smoothly.

The cobot loads the collection of CNC lathe with 0.1mm repeatedly precision. Besides fitting in seamlessly with the workforce, the cobots from Universal Robots were picked for their affordability, reduced power consumption and safety, which ensured that the protective stop measure turns the power off when a load is applied to it.

With the help of cobots we have increased productivity by 10-12 per cent. Along with the productivity increase, the quality of production has also increased. All of this has made our investment in cobot work well, certainly the best ROI in the field of technology.

PD: Collaborative robots are now the fastest growing segment of industrial automation and are designed to work in collaboration with humans to amplify their professional potential. Cobots have been tested by DARPA to explore new levels of automation across various industries.

The small footprint, low energy consumption, easy programming, allows companies to have the flexibility of automating different production lines at different times for customised batch productions. With none of the traditional costs associated with expert robotic programming, set-up and fenced off work areas, the average payback of cobots have, in some cases, been less than six months, but on an average about two years.

From the scientific and research industry, Aurolab is an integral part of Aravind Eye Care Systems; provides high quality eye care products like products used in cataract surgery, as well as intraocular lenses that assist people in regaining vision after the operation.

Skilled manpower will be required in order to validate automated process