Home  »  Blogs  »  Monitoring of health schemes is key to effectiveness 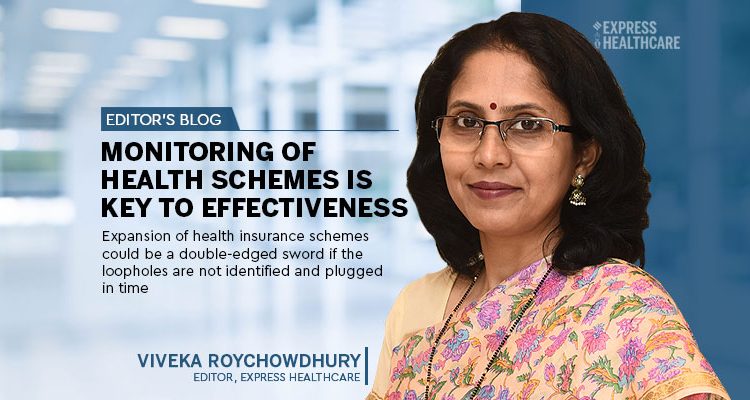 Doubts on the cost effectiveness of government-sponsored health schemes, both at the state and central level, continue to raise red flags. As the share of public spending on health is not expected to
increase too much, policy makers will have to ensure that these findings are used to tweak existing schemes and make them more effective.

For instance, a recent analysis of government sponsored health insurance schemes in Andhra Pradesh, Tamil Nadu and Karnataka shows that expansion of such schemes may skew expenditure away from primary and secondary care towards tertiary care, if fiscal space is limited. The researchers from the National Institute of Public Finance and Policy point out that although the schemes are largely dependent on private health providers for delivering services, a competitive public health system may help in containing costs and the corresponding fiscal burden.

Andhra Pradesh’s Aarogyasri, Tamil Nadu’s Kalaignar Health Insurance Scheme and Karnataka’s Yeshasvini and later, Vajpayee Aarogyasri schemes were some of the earliest state sponsored health schemes. But the evidence on effectiveness of public spending through such schemes has been mixed. For example, due to the fiscal burden of the scheme, the Andhra Pradesh government had to approach the Central government (Planning Commission) for financial assistance in 2009. The government of Tamil Nadu, which had a stronger public health system, was able to negotiate and fix prices for various procedures at a lower rate for the majority of private hospitals than that in Andhra Pradesh and Telangana.

However, most schemes failed in the primary objective of insurance schemes to extend financial protection against out-of-pocket-expenditures (OOPE) for in-patient treatment. OOPE, in fact, increased but this could be because latent demand for hospitalisation was translated into effective demand by releasing financial constraints.
Access too remained a key failing, with patients from the poorer districts, traveling to the main cities for specialised care, be it in empaneled private hospitals or larger public hospitals. Again, Tamil Nadu saw a better spread of claims as public hospitals are relatively more spread out.

For instance, early trends from utilisation of oncology services for the first 11 months, (September 2018 to July 2019) for 26 States/UTs from the PM-JAY dashboard showed that oncology made up nine per cent of claims submitted, and 34 per cent of all tertiary claims submitted in this time frame across 26 States/UTs. In response to data that the top category of procedures utilised for oncology services is unspecified regimen’, the researchers recommend a revision of packages to deal with this category and to better regulate packages.

Migration for cancer care is most prominent in Madhya Pradesh followed by five states Uttar Pradesh, Bihar, Jharkhand and Maharashtra, with these states accounting for 80 per cent of the beneficiary movement for cancer care services. The paper’s authors recommend that this migration for cancer care can be reduced by linking empanelled hospitals with National Cancer Grid (NCG) and educating states to be part of the virtual tumour board of NCG, to discuss diagnosed cases with eminent experts.

Similarly, an analysis of cataract management under PM-JAY from January to May 2019, shows that in the top three states (Chhattisgarh, Jharkhand and Uttar Pradesh) raising pre-authorisations for cataract, a significant proportion of the claims were from private hospitals. Though the launch of PM-JAY has seen the opening of smaller ophthalmology clinics, especially in interior areas to meet increased demand, the researchers caution that more on-ground audits are needed to ensure the medical necessity and quality of care being offered.

As India undergoes a demographic transition, with the percentage of population aged >60 years projected to rise from 8.9 per cent in 2015 to 12.5 per cent in 2030 and 19.4 per cent in 2050, the age group prone to cataract blindness, cataract management will be a growing speciality area. Hence the NHA will have to take steps as early as possible to ensure proper facilities are in place.

Another policy brief analysing the supply side response to insurance expansion, using evidence from Rashtriya Swasthya Bima Yojana (RSBY)/ Mukhyamantri Swasthya Bima Yojana (MSBY) in Chhattisgarh, shows that while there is strong evidence of a positive impact of the two schemes on the private health care market, as evidenced by more active market entry by private hospitals, and service volume expansion of all providers, this trend is highly concentrated in smaller, dental and eye hospitals. The high growth in these two ‘low entry barrier’ specialties raises questions about potential supplier-induced demand and distorted incentives given to hospitals under RSBY/MSBY, including the potential for ‘cherry-picking lucrative packages and less complex cases’, according to the authors of the study.

Insurance expansion thus improves supply of services but policy makers need to track if the services are of the desired quality and meet the need of the population.

TECHNIA partners with B Braun

Why personalised preventive healthcare should be an integral part of healthcare…