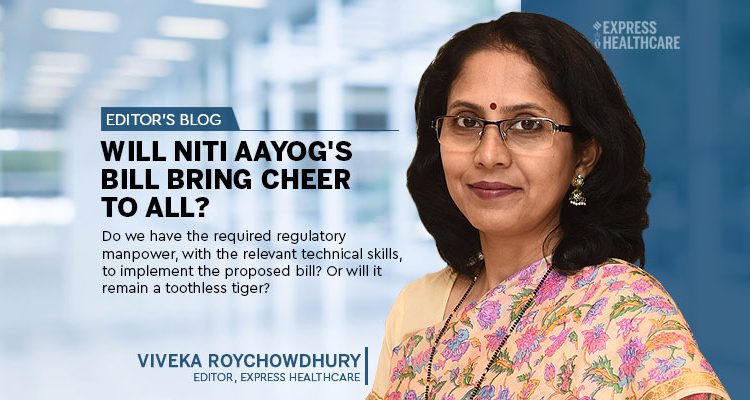 Do we have the required regulatory manpower, with the relevant technical skills, to implement the proposed bill? Or will it remain a toothless tiger?

But is India’s medical device sector ready to be regulated on par with their global counterparts? Many of whom have years, if not decades, of data from clinical trials and post marketing research backing them?

Are domestic manufacturers and importers ready for penalties to the tune of Rs 1 crore and/or imprisonment, if their devices are proved to be unsafe or if they do not protect patient data?

And do we have the required regulatory manpower, with the relevant technical skills, to implement the
proposed bill? Or will it remain a toothless tiger?

After years of being treated like the younger sibling of the pharma sector, India’s medical device manufacturers seem close to getting their wishes granted. Primarily for a dedicated medical device regulator as well as separate legislation.

Let’s hope that they get their house in order and gear up for the closer scrutiny that this will entail, once all parts of the proposed mechanism are in place.

There are cautionary tales from other segments of the healthcare sector. Many clinical research organisations had to shut down during the transition to tougher norms. Similarly, many MSME pharma companies are struggling with spiraling input and regulatory costs, combined with increasing price controls on the final medicines. Will Made In India medical device manufacturers, so crucial to the success of schemes like Ayushman Bharat as well as the health of the general population, have the resilience to ride out the rough weather ahead?

All that’s clear for now is that 2020 will be a do-or-die year for India’s medical device sector. The process which started in 2006, now seems close to major milestones. Ironically, these were written into the original draft but are only now coming to pass!

India’s Medical Device Regulation Act was first drafted in 2006. Policy makers recognised that
‘an entirely different system and method of regulation from the current national and international practices that are being applied for the regulation of drugs and cosmetics is required’. The preliminary remarks in the 2006 draft noted that this was because ‘a diverse range and multitude of medical devices are in use, which are manufactured using a wide variety of technologies’.

In spite of this statement, it has taken more than a decade for medical device regulation to come out
of the shadow of the Drugs and Cosmetics Act, 1940 (D&C Act).

The highlight of NITI Aayog’s proposal is that the medical devices sector needs a separate legislation and regulators. In contrast, according to the Ministry of Health and Family Welfare’s October 18 notification, from December 1, all medical devices would be regulated under sub-section (b) of Section 3 of the Drugs and Cosmetics Act, 1940 (D&C Act) and the Medical Devices Rules, 2017. The health ministry’s notification gives the industry 30 days to forward suggestions /comments/objections.

Medical device companies have reiterated their stand that they are not against regulation per se. Rather, they welcome regulatory oversight as a way to ensure good quality at affordable prices. Regulation would also protect the reputation of the sector, weeding out products of poor quality and shady manufacturers. However, they have pointed out that while staff of the CDSCO are competent to regulate medicines, they lack the technical expertise to evaluate medical devices. They allege that this lack of experience was evident during the recent cases of faulty implants.

There now appears to be a fairly wide acceptance among policy makers that drugs/medicines are very different from medical devices like stents, implants and imaging equipment. Thus, it is logical that different parameters would need to be applied. The issue is that creating a separate regulatory framework and mechanism, is a process of evolution.

The NITI Aayog’s proposal will soon be released for public comments but it seems to have many of the components of the health ministry’s October 18 notification. With the big difference that it would be monitored separately.

Medical device companies are also hoping that the NITI Aayog’s draft Medical Devices (Safety, Effectiveness and Innovation) Bill, 2019, reduces the list of medical devices on the notified list. In spite of strident opposition from industry stakeholders, the health ministry has expanded the list of
notified medical devices over the past year. Currently 23 medical devices are on this list, ranging from syringes and stents to condoms.

The good news is that while the NITI Aayog’s Bill awaits consensus, other parts of the regulatory system are being out into place. On October 3, a CDSCO notice announced that four labs had been registered by the CDSCO as medical devices testing labs. Each lab is restricted to certain categories of medical devices which it can test or evaluate. The CDSCO has indicated that more applicants are being evaluated.

Thus, both importers and domestic manufacturers of medical devices are pinning a lot of hopes on the NITI Aayog’s proposed bill. While it might not be perfect, at least it will be a start in the right direction.

‘All our products are fairly priced and competitive to market rates and in no way, compromise on quality’