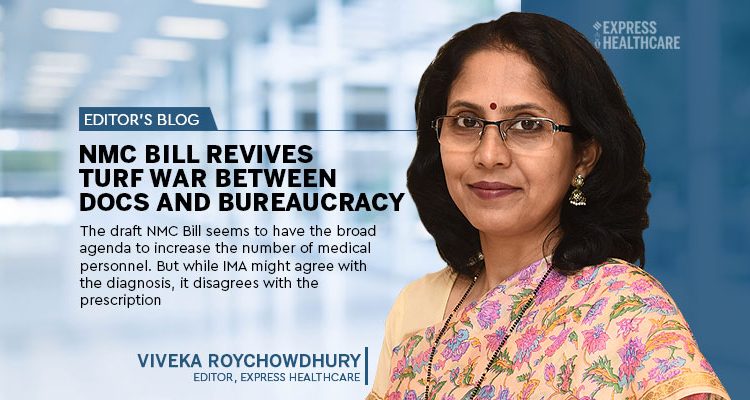 The draft NMC Bill seems to have the broad agenda to increase the number of medical personnel. But while IMA might agree with the diagnosis, it disagrees with the prescription

The draft National Medical Commission (NMC) Bill 2019 recently passed in the Lok Sabha and Rajya Sabha has divided the doctor community in India. While the Indian Medical Association (IMA) called for a strike on July 31 and says it will intensify the protests, other factions have hailed it as a fresh start.

The protesting doctors and associations hoped that there would be changes before it was passed by the Rajya Sabha. But except for two relatively minor amendments, which will go back to the Lok Sabha for the nod, the draft Bill is unchanged. Minister of Health and Family Welfare, Dr Harsh Vardhan maintained that the Bill would be “the biggest reform of the Narendra Modi government.”

The draft NMC Bill seems to have a broad agenda to increase the number of medical personnel. But while IMA might agree with the diagnosis, it disagrees with the prescription.

Claiming that Niti Aayog did not consult them during the framing of the draft NMC Bill, IMA said the Bill will result in lower standards of medical education and therefore endanger healthcare delivery.

For example, Dr KK Aggarwal, a past IMA president, points out that Section 32 of the draft Bill ‘provides for licensing of unqualified non-medical persons enabling them to practice modern medicine.’ Under the Bill, the NMC may grant a limited license to certain mid-level practitioners connected with the modern medical profession to practice medicine. These mid-level practitioners may prescribe specified medicines in primary and preventive healthcare.
In any other cases, these practitioners may only prescribe medicines under the supervision of a registered medical practitioner.

But President (Elect) Dr BB Wadhwa and some past presidents of Delhi Medical Association who have supported the Bill, aver that mid-level health providers like nurses have been found useful in improving health outcomes all over the world.

We definitely need extra hands at the primary and preventive care levels. There is also the chance that AYUSH practitioners might be allowed to practice allopathy via bridge courses. But will this endanger the patient? Other countries might have evolved better systems to ensure that paramedical staff and crosspathy practitioners meet basic criteria to provide this care without putting the patient at risk.

Secondly, Dr Wadhwa et al praise the changes in medical education proposed by the draft NMC Bill. The draft Bill does away with a licentiate exam and designates a common final year exam as the National Exit Test. It also proposes to empower the NMC to frame guidelines for determination of fees for up to 50 per cent of the seats in private medical institutions and deemed universities which are regulated under the Bill.

To counter this, Dr Neeraj Nagpal, Ex-President IMA Chandigarh points out that many parliamentarians have set up medical colleges and thus have a vested interest in pushing such a Bill through.

Patients and medical students are caught in the crossfire, as medicos and bureaucrats fight their turf battles. IMA as an association has yet to redeem itself from charges of corruption related to certification of colleges etc.

But the NMC could also go the same way, as members will not be elected but nominated. While the draft Bill provides for a search committee chaired by Cabinet Secretary and will have medical and non-medical experts along with one elected doctor, there is every chance that the same nexus between Council members and owners of medical colleges will arise.

Yet another key health-related policy is up for review: the National Digital Health Blueprint (NDHB). The blueprint recommends the set up of a purely government organisation with complete functional autonomy. It will adopt some features of existing National Information Utilities like UIDAI and GSTN.

The expected outcomes of the blueprint sound Utopian right now. It proposes that we will be able to access our electronic health records within five clicks. We would not need to duplicate any diagnostic test during the course of an illness, despite being treated by different health service providers. All this and more, while promising to protect the privacy of personal and health data.
With increasing instances of data theft, the NDHB needs to be discussed and debated by all stakeholders before being implemented. Else, it will go the same way as the NMC Bill 2019.

Neuberg Diagnostics ties up with C-CAMP