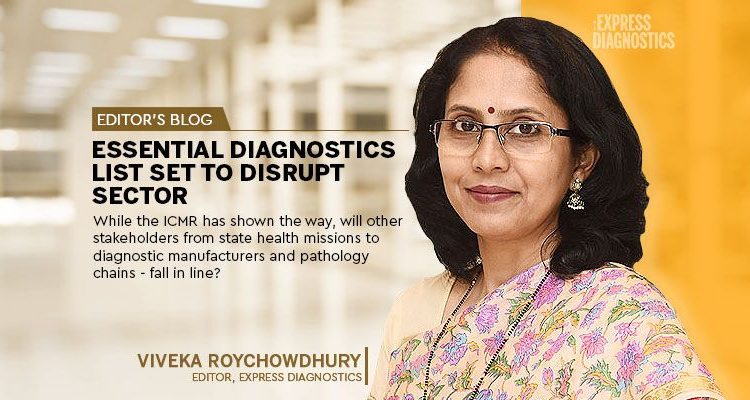 A further irony is that only three to five per cent of healthcare spending goes into diagnostics tests, even though these tests dictate further treatment.

India was the first country to follow the WHO’s lead on this front. The Indian Council of Medical Research drafted India’s first National Essential Diagnostics List (NEDL) and released it last December for a month of feedback from the industry. Though modelled on the WHO’s EDL released in May last year, India’s list builds upon the Free Diagnostics Service Initiative which was launched by the Ministry of Health & Family Welfare (MoH&FW) in July 2015.

The NEDL could be both disrupt as well as destroy the diagnostics sector. While the ICMR has shown the way, will other stakeholders – from state health missions to diagnostic manufacturers and pathology chains – fall in line?

The NEDL is no magic bullet. Firstly, the ICMR cannot  fix the prices of the tests as it is not the implementing body. As clearly stated in the NEDL document, the EDL will  complement the national EML which has been successful in facilitating access to treatment and promoting affordable drug prices. The NEDL draft hopes that these measures will aid in the promotion of R&D for new appropriate and effective diagnostics which in turn will lead to reduction in costs.

The National List of Essential Medicines (NLEM) is implemented by the Central Drugs Standard Control Organisation (CDSCO), which sets the prices of medicines under the Drug Price Control Order, 2013. Hence unless the NEDL can fix the prices of these diagnostic tests, patients in India will still end up paying different prices for the same tests depending on the service provider. If implemented in the same spirit as NLEM, NEDL will disrupt the diagnostics sector. A rationalisation of prices of diagnostics will be good for the wallets of patients/caregivers. But on the flip-side, it will erode margins of pathology labs and diagnostic kit providers, etc.

Secondly, standardisation of technology/diagnostic services is as crucial, if not more than standardisation of prices. Thus the NEDL is not just about availability and
accessibility, but also quality of diagnostic tests. Once we have all three aspects, healthcare outcomes will improve. Once again drawing parallels with the pharma sector, the jury is still out on whether the NLEM has improved quality, accessibility and availability of medicines.

Thirdly, all the good intentions in the world are useless if the implementation is faulty. Since health is a state subject, it is up to the states to ensure that the NEDL is implemented in a way that it benefits the maximum number of patients, both in the public and private sector.

For instance, even though we had initiatives like the Free Diagnostics Service Initiative in place since July 2015, concerns were being raised on the availability of tests. A pilot study published in The Lancet Infectious Diseases, Volume 18, Issue 10, in October 2018, titled Availability of Essential Diagnostics in Primary Care in India, found major gaps in test availability, with large variations across the three districts chosen for this study. Between December 13, 2017 and March 22, 2018, the study authors assessed 21 primary health centres in Tumkur (Karnataka),
13 in Fatehpur (Uttar Pradesh), and six in Wardha (Maharashtra).

Though this was a dipstick survey and therefore not of much statistical value, there are some noteworthy pointers. For example, primary health centres in both Tumkur and Fatehpur had limited or no availability of blood counts and glycated haemoglobin A1c tests, whereas these tests were available in Wardha district. The difference between the three centres chosen was that Wardha district used a public–private partnership (PPP) model, in which diagnostic testing was outsourced to a private laboratory.

The study authors advise that a much larger nationally representative sample survey will be needed to confirm the findings of this study. The surveys should cover both public and private sectors and include all key dimensions of access—availability, use and quality—to generate a
comprehensive diagnostics access scorecard.

The WHO has already released the second EDL on July 9 with the next update due in 2020. The second version includes more non-communicable and communicable diseases. It also focusses on certain cancers and blood donations. Whether ICMR/CDSCO will follow suit or not, there is no doubt that the NEDL is an idea whose time has long since come.

Diagnostic services market to grow at 27.5 per cent in next five years: Report