Diagnosis, the first step of healing 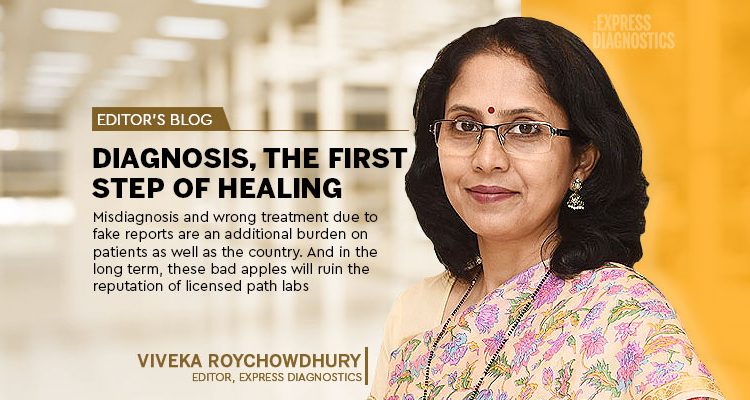 Misdiagnosis and wrong treatment due to fake reports are an additional burden on patients as well as the country. And in the long term, these bad apples will ruin the reputation of licensed path labs

The Indian Express launched Express Pharma in December 1994, about 25 years ago. Express Healthcare followed in January 2000. And in 2019, we bring to you, Express Diagnostics. A monthly publication covering the full gamut of the diagnostics sector. News and news makers, policies and practice, established players as well as start ups.

Why diagnostics? ‘If we can make the correct diagnosis, the healing can begin. If we can’t, both our personal health and our economy are doomed.’

This quote from Andrew Weil sums up the crucial role of diagnostics services in our health as well as our nation’s future.

India’s diagnostic market is expected to grow at a CAGR of 20.4 per cent over 2012-22. According to estimates from the Ministry of Commerce and Industry on the India Brand Equity Foundation (IBEF) website, growth estimates are from $12 billion in 2015 to $32 billion in 2022 from a modest $5 billion in 2012. The market is split between imaging and pathology based services, with 30 per cent and 70 per cent share respectively.

The logic is simple. As India ages and incomes rise, citizens will increase their health spends. Lifestyle-related conditions like obesity and diabetes require frequent and regular tracking of health parameters over the patient’s life time. These go much beyond annual health check ups. In an era of evidence-driven medicine, doctors now increasingly rely on diagnostics to validate and even guide treatment protocols.

Government funding too has fuelled the growth of the diagnostics market. Schemes under the National Health Mission provide funding to states to provide free diagnostic services. The initiative got funding of Rs 759 crores for 29 states/UTs in 2017-18. Pegged as the world’s largest government funded healthcare scheme, Ayushman Bharat, launched on September 23, 2018 will also drive growth in diagnostics.

But the government could do a lot more. For instance, newborn screening is not yet mandatory in India. Early detection of common metabolic and genetic disorders will lead to early treatment. This could drastically reduce the disease burden related to more than 50 diseases conditions like congenital hypothyroidism, sickle cell disease, phenylketonuria, fatty acid metabolism disorder etc.

Unfortunately, these alluring growth figures are a double edged sword. Aggressive CAGRs combined with lax monitoring have attracted the wrong kind of entrepreneurs. This edition’s cover story analyses one aspect of the dark underbelly of India’s diagnostics sector. Unlicensed pathology labs, with fake pathologists churning out fake reports could have tragic consequences for patients.

Misdiagnosis and wrong treatment due to fake reports are an additional burden on patients as well as the country. And in the long term, these bad apples will ruin the reputation of licensed path labs. Do see the cover story for more details (Illegal path labs: India’s open secret, pages 14-17, Express Diagnostics, July 2019 http://staging.expresshealthcare.in/diagnostics-mag/express-diagnostics-july-2019/412836/)
Less than five per cent of laboratories in India are authorised by the National Accreditation Board for Testing & Calibration Laboratories (NABL). In fact, larger chains too do not have all their labs NABL certified but at least they have some internal processes in place to bench mark all their labs. The bottleneck is that we lack sufficient trained pathologists for the expanding chains of diagnostics labs.

While the government is cracking down on unethical practices and illegal labs, the arm of the law will always lag the criminal mind. Health authorities have formulated and enacted laws like the Clinical Establishment (Registration and Regulation) Act of 2010 which govern such path labs. Unfortunately, implementation and enforcement at the state level is weak.

Expectations from patients too are growing and doctor distrust could soon spill over into this segment as well. As most of the diagnostics market consists of service providers in the unorganised space, there is wide variation in the price of tests. Credibility and reproducibility of test results too are a major problem. Accreditation of diagnostics labs is one answer but adds to the costs of the tests.

Lastly, as Martin H. Fischer cautions, diagnosis is not the end, but the beginning of practice. The diagnostics sector will need to drive and partner the next steps in the healthcare delivery chain.

Be it incorporating the digital dimension or becoming miniature as point-of-care test kits, Express Diagnostics will reflect this evolution. Come, join us on this odyssey of discovery!