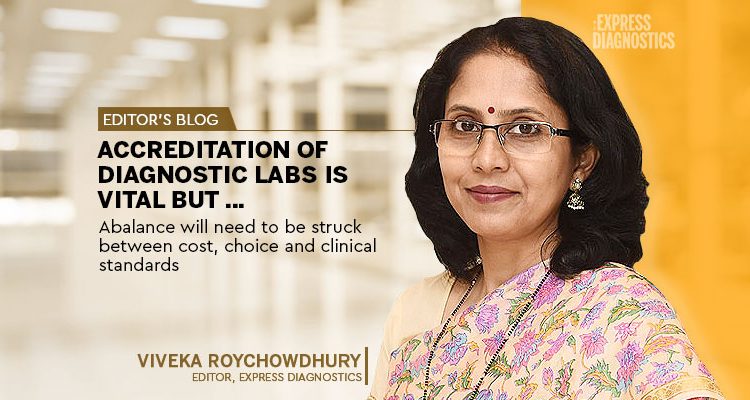 A balance will need to be struck between cost, choice and clinical standards

The diagnostics lab sector reflects both the highs and lows of India’s entrepreneurial spirit. There are close to 100,000 pathology and diagnostic labs in India. But only about 1000 are accredited by National Accreditation Board for Testing and Calibration Laboratories (NABL). This is not very reassuring for patients in India as it means that they cannot always trust the lab results they receive. This puts a question mark on diagnosis and treatment outcomes, adding to the cost of healthcare borne by patients.

Its been a decade since one of the first moves to set standards for diagnostic labs in India. In 2009-2010, the Central Government Health Scheme (CGHS) announced NABL accreditation as mandatory for empanelment of laboratories. NABL received 225 applications for accreditation of medical laboratories to ISO 15189 standards. But 80 per cent had to be shut as they could not meet the requirements of NABL accreditation.

A decade later, a majority (80 per cent) of India’s diagnostic labs are small, 18 per cent medium and only two per cent are large sized national chains. As it is not feasible, especially for small laboratories performing basic testing, to directly aim for ISO 15189 accreditation, NABL decided to start small with an entry level voluntary scheme.

Called the Quality Assurance Scheme (QAS) for Basic Composite (BC) Medical Laboratories (Entry Level), the first version of the procedure was released on February 4 this year, followed by two amendments, on June 11 and July 8. The amendments include components of assessment of technical competence to the criteria checklist. It is hoped that this will ensure quality of test results given by the laboratory and facilitate achieving ISO 15189 accreditation over a period of time.

The entry Level QAS-BC certificate issued to laboratories, after a proficiency testing, is valid for two years. NABL will conduct an onsite assessment at least once during two years of cycle. Five to ten per cent of the labs complying with QAS-BC scheme will undergo unannounced onsite assessment.

These laboratories may continue under this scheme by applying for renewal after the cycle of two years. After two cycles i.e. four years, NABL hopes they will achieve accreditation as per ISO 15189. Approved labs will be monitored by having to participate in an annual Proficiency Testing (PT) and submit these reports for review by NABL.

Most labs of the national diagnostics chains are NABL accredited and in fact, are urging the government to make regulation more stringent. The hope is that NABL accreditation, followed by ISO 15189 will prove so unachievable for smaller regional, single lab entities that they would either shut down or sell out to the bigger names in the business.

Around the same time, Dr Lal PathLabs’ subsidiary PathLabs Unifiers acquired 70 per cent take in Gujarat’s Amins Pathology Referral Laboratory. This was besides its earlier acquisition in June of 70 per cent stake in Central Lab, Indore to augment presence in Central India.

As per Frost & Sullivan analysis, the diagnostics industry is projected to grow 1.3x to Rs 802.1 crore by FY20P. An asset light model as compared to hospitals has attracted entrepreneurs and venture capital funding as well.

Consolidation is good as it brings in standardisation of results and often patients can access a larger menu of tests thanks to other partners in the chain. Companies benefit from economies of scale but are these benefits passed on the patients?

Like medicines, patients do not have the expertise to evaluate the quality of lab results nor interpret the results. They depend on doctors and hospitals to guide them. An accreditation number on a website or framed certificate from a government body like the NABL hung on a wall of a diagnostics lab is often the only tangible sign patients have while trying to decide which lab to trust. This choice is of course only available in metro cities. Patients in rural areas often do not have even this luxury of choice.

As national chains vie for market share, their spend on branding campaigns, harping on their various accreditation, both national and global, is increasing. But will the regulator ensure that they actually do what they say they do? That they actually follow their own SOPs, that they are not only on paper but also practiced, in letter and spirit?

Thus, NABL’s drive to create more awareness and get more labs to start on the accreditation journey is vital to make accurate diagnosis more accessible, available and affordable for all Indians.