PM Modi has a tough act to follow: his own!

He will have to balance industry interests with patient well-being. The first needs to be coaxed to invest in India and cement his pro-industry creds. The second needs to be appeased because it's the source of his groundswell of votes 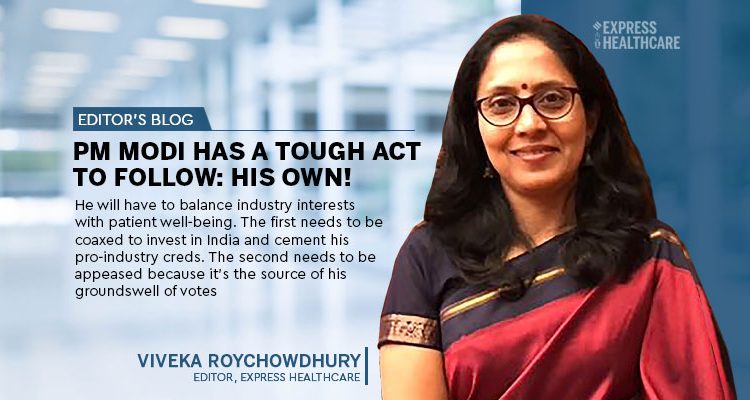 Prime Minister Modi’s second term, with a single party majority, is a once in a lifetime opportunity for him to reshape the country’s place in history. Ironically, he has a tough act to follow: his own! Will he be able to exceed to his own performance in the first term?

According to media reports, the government is planning a cut of over 65 per cent in maximum retail prices of stents and knee implants.

Key challenges that have been highlighted and need to be tackled are issues with quality of medicines and devices made in India, high treatment costs, ‘irrational’ and ‘unsafe’ combination drugs and dependence on China for key ingredients to make medicines.

Expectations stand tall. Ayushman Bharat (AB), dubbed Modicare — PM Modi’s signature scheme to provide insurance backed secondary and tertiary healthcare to the economically weaker sections of society was another masterstroke. If PM Modi can increase the allocation for healthcare in the budget to the target of 2.5 per cent of GDP, this vision can be expanded to include primary healthcare and prevention. In time, as the sphere of prevention spreads, AB will be less burdened and more effective. Given the massive mandate, at least some of the states which rejected AB might have a re-think and now come on board as well. ‘Modicare’ can thus be the NDA/PM Modi’s most lasting legacy to India.

Not too many private hospitals signed up for AB, as they were unhappy with the reimbursement packages being offered under the scheme. Most were in a wait-and-watch mode as there was always the possibility that a non-BJP/Modi government, or even a non-majority BJP/Modi one, would be forced to repeal AB, in the same way that US President Trump repealed Obamacare/ Affordable Care Act. Now that AB is here to stay, will we see more participation from private hospitals? Or will the government moderate their stance, paying heed to the advice of Dr Prathap Reddy, Chairman, Apollo Hospitals Group to have ”a prudent approach to pricing and reimbursements to encourage widespread adoption”?

Analysts are predicting increased consolidation in India’s hospital sector as entities struggle for sustainability. ICRA reported a 155 per cent increase in the total value of M&A transactions in the sector, with FY2019 clocking Rs 7,615 crore, as against Rs 2,991 crore in FY2018, the highest value of hospital M&As in over five years. Consolidation brings economies of scale but will these be passed on to patients? Also, the flip side of consolidation is the creation of monopolies, which reduce choices for patients.

So, while PM Modi’s mandate may be massive, it comes with its own burden to live up to his pre-poll promises. He will have to balance industry interests with patient well-being. The first needs to be coaxed to invest in India and cement his pro-industry creds. The second needs to be appeased because it’s the source of his groundswell of votes.

PM Modi has cultivated an image of being pro-industry right from his days as chief minister of Gujarat. Besides strengthening local industry with moves like the indigenisation of medical devices, India also needs further investments by private healthcare, be they hospitals or med tech players. This will bring the latest medicines/medical devices to India as well as create jobs — a major poll promise.

But these investors have to be first convinced that India has a large market which can afford cutting-edge medicines or medical devices to make their business model viable. With a section of India living below the poverty line, healthcare spends remain low. Investors have remained ambivalent about further investments. Thus, the government’s populist measures like price and trade margin rationalisation will need to be accompanied by sufficient market expansion initiatives to incentivise the corporate sector to invest.

At this point, PM Modi can do no wrong and can therefore take tough decisions. But will he?