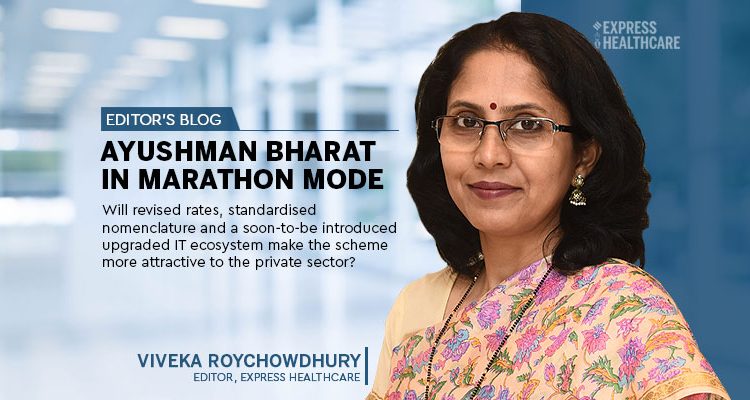 This is a not a sprint but a marathon.”This was the sign off message of Dr Indu Bhushan, CEO, National Health Authority (NHA) at Express Healthcare’s Healthcare Senate 2019 this July. It is now clear that Dr Indu Bhushan was referring to the overhaul in India’s universal health coverage scheme, the Ayushman Bharat Pradhan Mantri Jan Arogya Yojana (AB PM-JAY).

As a follow up to his comment two months later, this became more evident as the NHA unveiled its revamped AB PM-JAY scheme with important course corrections. The success of AB PM-JAY depends on collaborations at different levels. While policy makers and the NHA at the centre put the strategy in place, they are dependent on various states and union territories to convert this strategy into practice. Similarly, at another level, both the central and state governments as the payor/financier of these health schemes have to collaborate with healthcare providers, both public and private hospitals, to deliver this care.

The NHA may need collaborators but it is clear that they will weed out rogue elements. Dr Harsh Vardhan, Union Minister of Health and Family Welfare spoke of ‘a zero-tolerance approach towards any kind of fraud’, with the anti-fraud framework resting on three key pillars of prevention, detection and deterrence. He warned that 111 hospitals have already been de-empanelled on charges of corruption and fraud. The NHA is already working on PM-JAY 2.0, the new and upgraded IT ecosystem, which will make it tougher to slip through the cracks. Thus, learnings from the first year are already being used to tweak strategy, plug loopholes and improve efficiency. But will this carrot-and-stick approach work?

Will revised rates, standardised nomenclature and a soon-to-be introduced upgraded IT ecosystem make the scheme more attractive to the private sector?

According to official statistics, private hospitals accounted for more than half (53 per cent ) of the 46.5 lakh hospital treatments provided in the first year of the scheme, corresponding to claims worth Rs 7,490 crores treatments. 60 per cent were for tertiary care. Clearly, the revisions are aimed at attracting more private sector participation. As Dr Harsh Vardhan, commented they ‘are confident that with the revision in the Health Benefit Packages of  AB PM-JAY, many new private hospitals will get empanelled with the scheme.’

Bigger private hospital chains are still holding out for better package rates, the rationale being that the AB PM-JAY rates do not meet their expenses, especially in metro cities where the costs are much higher. Delhi based Medanta has reportedly signed up while Apollo Hospitals will test the waters by setting aside five per cent of its bed capacity in tier-II and tier-III cities for the scheme. But with the NHA in marathon-mode, all stakeholders will need to re-calibrate their responses.

For its part, the NHA has selectively revised the existing 1393 Health Benefit Packages (HBP) of the scheme. The ‘restructuring and rationalisation’ exercise has resulted in 469 packages remaining unchanged, 554 packages being discontinued, and rate cuts in 57 packages. A NHA press note specified that these cuts would not compromise ‘the range of treatment covered under PM-JAY’, and were ‘a conscious attempt … to keep the price of abuse prone packages at the minimum level to minimise incentives for abuse.’

The three step weeding out process started with specialist committees red flagging ‘aberrations and anomalies’ like ‘inconsistencies in the nomenclature and pricing’ in respective specialties HBPs. These were then examined and moderated by the review committee, consisting of the the NHA, the Department of Health Research (DHR), Indian Council of Medical Research (ICMR) and Tata Memorial Hospital. In the third step, recommendations of the review committee were put up to the Governing Board of the NHA for approval.

The revamping exercise tried to take care of two of the trickiest part of any health scheme: ensuring the right package is selected and monitoring price of each component of the HBPs.

On the selection front, the revised version of AB PM-JAY aims for more standardisation of the nomenclature and definitions of packages. The NHA has chosen to lean on global practices, by initiating the process to align AB’s HBPs with the World Health Organization (WHO)’s International Classification of Health Interventions (ICHI) and International Classification of Diseases (ICD). According to the NHA, when completed, India may become the first country to use ICHI in its HBP list. This will no doubt be a significant achievement.

Pricing is another sore point, with the NHA detecting many cases of fraud in the first year. The pricing of medical devices has always been a hot-button issue and is now a key bargaining chip in the trade discussions between India and the US, the largest exporter of such devices to India. Hinting at this volatility, the NHA has said that ‘in preparation for the future, it is planning to configure the cost of implants / high-end consumables in its IT system separately at the back-end. This will be useful whenever there is a movement in the price of these significant components of a package cost.’

Reading between the lines, it is clear that the NHA will work to make the pricing more transparent in future versions of AB, so that a change in the prices of these devices will not be compensated by a corresponding change in the prices of other components of the HBPs. Given the government’s commitment, the private sector will have no choice but to join AB PM-JAY in this marathon towards universal health coverage. The only question is when.